I am beginning, I think, to get a sense of the loss and the astonishing sacrifices made by the crews of Bomber Command. I’m not sure if this is a masked sense of loss for Dad which I am projecting onto a bigger picture, or the realisation of what Bob experienced and then never discussed. I am finding it hard – I read something or find myself looking at a faded black and white photograph of a crew or individual airman and I suddenly am overwhelmed by a massive sense of loss and sadness. I am sure this is just the journey I am on, but it feels very personal – almost as if I am the first to realise this. It seems that tears after the evening meal are now an accepted desert course, for both me and my wife.

Just received a copy of ‘Luck and a Lancaster’ by Harry Yates. The book follows Harry’s training and tour with 75(NZ) Squadron. Not only does it begin to give me an idea of what it was like to fly operationally, but it provides an insight into the training (of a pilot) of aircrew. Its a fantastic read but what begins to concern me is the regular losses in the squadron. I am certainly not critisising the writing style or the sentiments of the author – but the matter of fact way that the loss of crews during a raid are described in the book are chilling and I begin to get a feel for the simple fact that during this time a loss of a crew was essentially just seen as an inevitable risk of the job – this after all, was war…… 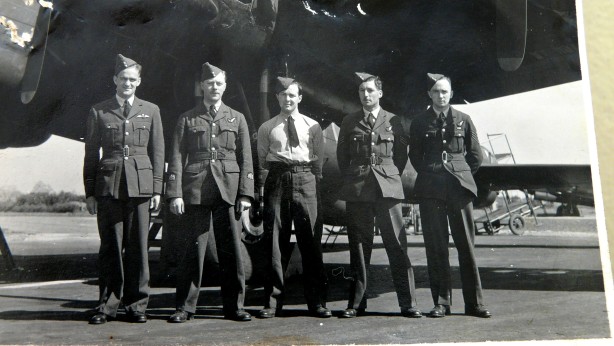 A day mulling over my first disappointment of aircrew research.

Of course it was incredibly unlikely to be a picture with Dad in it – I knew that before I saw it. Why would Peter know anything else about his Dad? I have a logbook and have started searching, I already realise that without a logbook and the interest, Peter would know nothing about his Father during the war. Does he not have any interest in finding out? – I have no idea, but I can’t blame him for not.

I have a picture of Vernon, Dad’s pilot and I have 4 more faces of guys that in all probability flew with Dad as well – OK he isn’t in the picture, but these faces are pieces in the jigsaw – pieces I didn’t have last week……

Of course I send an email to Zinzan’s son – and wait for a reply.

I am probably far to optimistic when I see that he (Peter) has replied – the fact that there is clearly an attachment with the email makes me almost drop my phone when I check my mail.

The first news is good, Peter’s father, Vernon John Zinzan was a pilot with 75(NZ) and based on the simple fact that he was the only person in the Squadron with that surname, means this was dad’s pilot.
Sadly, it seems Peter is in the same boat as myself – Vernon didn’t talk about the war either and all Peter has (the attachment) is a photo of his father and his aircrew…..might it include Dad…?

Paul Hickey from Australia posts in the forum on Bob. He has found entries in the London Gazette relating to Bob’s promotions;

And now the really exciting bit of news – he has found the granddaughter of Zinzan on an ancestry website and in her post she gives her fathers, the pilots son’s, email address. I can feel my heart racing as I read this – might there be a picture of Dad somewhere??

The response from the members of the Lancaster forum is swift and supportive. Many offer their condolences and recognise the position I find myself in – it seems Dad was certainly not alone in not talking about the war. There are several suggestions regarding where I should/ could look for more information and snippets of information begin to appear in the posts. It would appear I can get Bob’s war records from the MoD and there are documents that are held in the National Archive at Kew – Operational Record Books (ORB’s) that will contain information about the operations that Dad flew on.

Zinzan was a pilot and he started with the squadron in 1944 – before Dad got back – his bomb aimer broke his leg on a heavy landing after a first flight – it is suggested that Dad might have been a replacement to this individual when he arrived back at the Squadron.

More information comes back at a steady rate. WayneM in New Zealand seems to know a lot about the squadron – he comes back to me with specific information regarding Dad’s arrival at the squadron, his first operational flight, his departure and then return again in 1945. Seems like it might be worth getting some of these ORB’s to have a look at………

So Dad is gone and I am left here with a logbook, his medals and a whistle……I’m not sure where to begin, but I guess the internet is the best place to start my search. 75 Squadron brings some returns and I learn a little about the Squadron – donated to the RAF by the New Zealand government at the outbreak of war, the squadron found itself in the UK to form and train, what bad luck. The second highest casualties in Bomber Command by the end of the war – already I am thinking that Bob probably had a reason for not talking about these times…..

I find a forum – the Lancaster Archive Forum. The contributors seem knowledgeable and friendly – I join and post a new thread introducing myself and letting people know what I know – that Dad was a Bomb Aimer, he flew twice in 75(NZ) Squadron and that his pilots were Mayfield and Zinzan.
fingers crossed…….