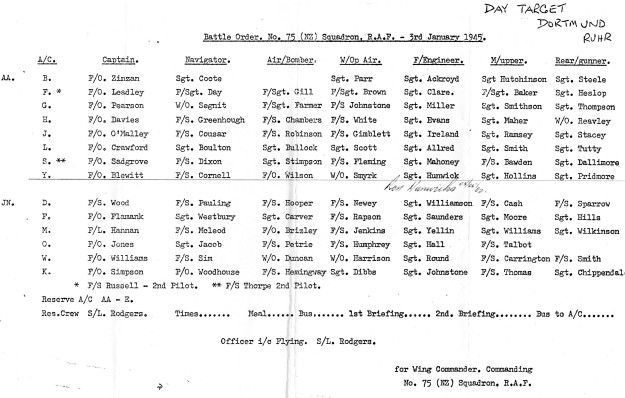 I get a reply back from Kevin regarding any details on Dad’s second tour crew. Disappointingly nothing, though an unexpected surprise Kevin sends me a copy of the Battle Orders for the daylight raid on Dortmund, 3rd January 1945. This raid is before Bob goes back to 75(NZ), but the gap under Air Bomber suggests that perhaps until his arrival, there was no ‘fixed’ member in that position for the Zinzan crew.

From a Squadron point of view, the Battle Order is also very useful as it not only provides another check regarding the aircraft flown on that raid, but also perhaps more interestingly, given the rarity ( or as I have found it) of information identifying crews in the 3 flights that 75(NZ) operated.