An early start and a bit of a drive, but with great pleasure I got to meet up with Doug Williamson ( flight engineer) and his wife Janet today. They had come over to the UK from New Zealand as guests of New Zealand Tax Management and the generosity of Ian Kuperis (its owner). Doug and 4 other ex-RAF bomber crew had failed to qualify for the official RNZAF visit in the summer to attend the unveiling of the Bomber Command Memorial in Green Park. The ensuing media storm around their exclusion at least bought the matter to the attention of Ian and to his credit, he decided to do something about it. 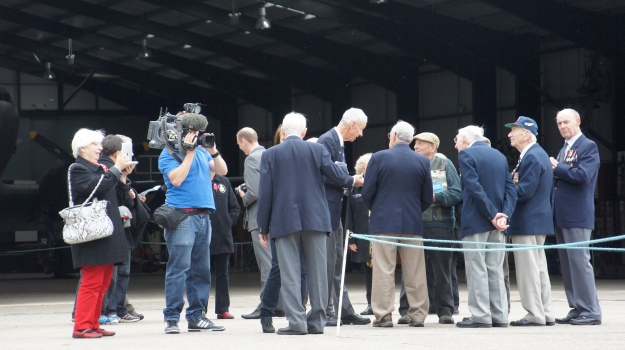 The boys arrived at about 1.00pm and after the inevitable demands from an accompanying film crew were satisfied I sat with Doug and Janet over a cup of tea. It was wonderful to actually meet them and lovely to listen to Doug talking about 75(NZ) and his memories of the squadron.

Sat with Doug, it was strange to think that he holds the dubious claim to fame of falling out of a Lancaster on an operational flight! On the night of the 4th April 1945 75(NZ) dispatched aircraft to contribute to a raid on Merseburg, a raid my father also flew on as it happens. Over the target Doug’s aircraft, JN-Dog, was hit by flak and the antifreeze tank at the step of the bomb aimers nacelle burst open. Doug had just previously removed his oxygen mask to eat some chocolate – after the impact of the flak shrapnel, Doug mistook the spilt antifreeze on his face for blood – the shock of this was compounded by a first low fire on the floor of the plane turning into a roaring blowtorch as the bomb aimer opened the emergency escape hatch in the nose of the Lancaster. Now beginning to slowly asphyxiate, Doug turned and fell over the central wing spar that passes through the inside of the plane and fearing the plane was about to explode, dragged himself to the open gap were an underside ventral gun was occasionally fitted. As he drifted slowly to earth, he watched JN-D fly away from him…….expecting it to explode, his feelings changed when it did not and slowly disappeared over the horizon. Unknown to Doug, the bomb aimer and pilot had managed to control and then extinguish the fire and in fact return to base!

The highlight of the day was an opportunity for them to take a taxi ride in the Lancaster they have at East Kirkby. I don’t have a problem in saying that hearing the ‘Jane’ fire up her 4 merlins brings a lump to my throat – to know that on this run it was full of original aircrew made it that more poignant.

At the end of the ride Doug climbed out of the plane with a wry smile on his face. I asked him if it had bought back memories. He smiled and shook his head – ‘Not really. it was a long time ago, I was young and happily ignorant of the dangers – it was a a state of the art weapon then – now, it felt like I was in an old car – it was great to do it – but it was a different time then’. 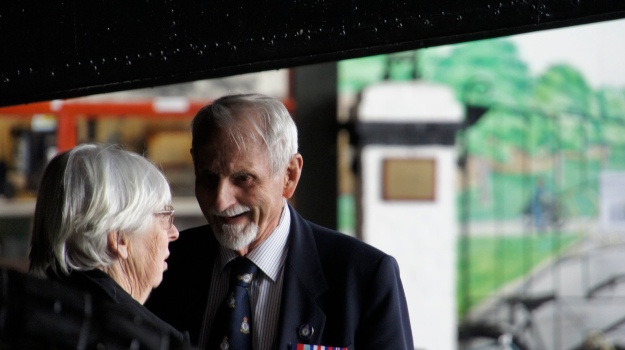 Doug and Janet after the taxi run

All to quickly it was over – I made my farewells and left for home.