A couple of weeks ago, I received information from Mike on his brother-in-law Sgt. Roy Wells and his loss, with the rest of his crew when their a/c, ND904 (AA-B) collided with a Lancaster from 115 Squadron, PD344 (KO-M), also with the loss of its whole crew. Many thanks to Lynn from the Bombercrew forum for passing on additional information about PD344 and its crew, particularly  Flight Sergeant Ross Cuthbert (A/B).

This was only the crew’s 5th operation.

The boy’s from 75(NZ) and 115 were finally laid to rest in the British military cemetery at Rheinberg in 1946 in plots 3G J-P and Plot 8G J-P respectively.

In a strange twist of fate, I have just discovered in ‘Lancaster – The Definitive History‘ by Harry Holmes and also ‘3 Group Bomber Command – an operational record‘ by Chris Ward and Steve Smith, that the 75(NZ) Lancaster ND904 actually came to the squadron FROM 115 Squadron – it’s designator code whilst with 115 was KO-M………..

Rummaging around the National Archives website as I am sometimes want to do, I found some teaching material for school kids about the war. My eye was first caught by a mention of 75(NZ) squadron – more astonishingly when I read the page, it was about the recollections of Flight Sergeant Gordon Ford (Wop), who flew on the Dortmund raid 3rd February 1945 in  ME450 AA-W when his pilot, Flight Officer Matthew Watson was injured during the raid, but nevertheless, managed to get the aircraft back to base (see reference to this a/c regarding RF127 here) as the other post notes – Dad and the boys flew 3 ops in this aircraft, the last being to Dortmund ( as was Gordon’s op) as was the same target on the 26th of February, when 4 of the 7 crew were killed in a crash on the return to base after the raid – ME450 AA-W was destroyed.

The Nazi and the Luftgangster

An unexpected surprise when I get home tonight. Doug has sent me a copy of his new book ‘The Nazi and the Luftgangster’. It’s based on Doug’s first book ‘ The Aimless Wanderings of a Nincompoop’ and now also includes the story of Lutz Dille. A combination of the autobiographies of two young men and their experiences during the Second World War.
First a British teenager, who became a flight engineer flying in a Lancaster bomber in 75NZ squadron. his experiences after bailing out over Leipzig, and capture in the last days of the war. His experiences as ate a planter in India and later emigration to Canada then to New Zealand.

Next a German lad who was in the Hitler Youth and his failed attempt to escape to Britain. Then, as an army reconnaissance photographer on the eastern front. His retreat from Kiev and eventual capture by the Americans. His experiences in Germany under Russian occupation. Learning to become a professional photographer and later his emigration to Canada.

The first airman’s meeting and friendship with the other is an attempt to illustrate that warfare is purely a political affair that arouses people’s primitive instincts to believe by their leaders that other people are sub human enemies driven by a thirst for power, lack of intelligence or religious bigotry, when in actual fact they are just ordinary people like themselves who are coerced into unthinking acts of violence by the pressure of society and custom.

Perhaps its a little late, but I my memory was jogged by something else, so I thought I would post this information from the Friends of 75 (New Zealand) Squadron Association summer newsletter in case anybody is interested;

We are having our winter reunion at the Dolphin Inn, St Ives in Cambridgeshire about 15 minutes from Mepal.  The cost is £118 per person for the 2 nights and it includes dinner bed and breakfast.  There is plenty to do in the area, Jack assures me there are some lovely villages within driving distant, plus The Pathfinder Museum at RAF Wyton but we will have all that organised for you when you arrive.

If anybody sees this, I would highly recommend it – this will be my third reunion, the members of the association are warm and welcoming and its good to realise that there is a community of interest about the Squadron.

I have omitted the personal contact information, so if you are interested in this event, contact me in the first instance and I will pass your details on to the Association.

Les Hofert, third from right, with his bicycle clips on – a close zoom of the Squadron photo at the top of this blog

After a contact on the blog at the weekend, I got the chance to catch up with Paul on the phone and listen to his story about his Grandfather Leslie Hofert, who was a Flight Engineer with 75(NZ) between January and June 1945, not only taking part in operational raids but also latterly participating in the ‘Manna’ food dropping raids over Holland and also PoW repatriation flights from Juvincourt. I shouldn’t be surprised by strange coincidences anymore, but the reason Paul initially contacted me was because of my previous post about RF127 AA-W, it seems as if Leslie’s crew essentially inherited it from my Fathers crew

We had a great chat for about an hour and a half and I realised that Paul was in the same place almost as I was 12 months ago – and at the same time also realised how much I know now relative to when I began. It was great to feel  I had (hopefully) helped him and I look forward to seeing how his research journey progresses.

Could this be RF127, the aircraft that Bob flew 9 ops in during his second tour? In all, 13 of his 21 2nd tour ops were in an aircraft marked AA-W.

I came across a thread started a few months ago on the Wings Over New Zealand forum by Chris regarding the marking of 75(NZ) aircraft as G-H leader for raids. Though not particularly clear, the aircraft is marked AA-W for ‘William’ and the photo was taken in April 1945. Bob and his crew didn’t fly on the raid this aircraft is on in the picture, but given the date, I am pretty sure that this is RF127.

Maybe the letter ‘W’ was lucky for the boys. Prior to RF127 they flew another a/c marked as AA-W, this time its serial number was ME450. Their final operation in ME450 was on the 20th of February 1945 to Dortmund – 6 days later ME450 flew again to Dortmund, on its return it crashed near Chatteris, Cambridgeshire, killing 4 of the 7 crew.

The poster of the image comes back to me on the forum and suggests the bloody obvious – check the ORB………
I do – interestingly, AA-W on the night of 23 April is listed in the ORB as RF137. Three ops before and one after, it’s identified as RF127. A dig around in ‘Avro Lancaster – the definitive record‘ by Harry Holmes, identifies RF137 as actually being part of 61 Squadron (QR-E), which blew up at Skellingthorpe on the 25th February 1945.
Jesus Christ – this is a picture of one of the Lancasters Bob and the boys flew in…………

I received an email from Vic Jay this evening, letting me know that he had finished the research on his father and that it was now up on a blog. Vic joined a discussion thread about 75(NZ) on the Lancaster Archive Forum a while back and I recognised at the time, a similar need for help that I arrived with in the forum a year ago. I am pleased to say the members were able to help Vic and he presents a wonderful story, covering Bob’s early years and time with the squadron. There’s some beautiful images on the blog and you should go and have a look – another story that was not only worth telling, but also worth reading. 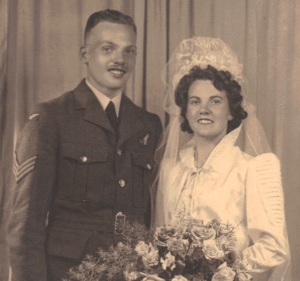 Roy and Joyce Wells on their wedding day at Egham church, 1st July 1944

All the crew were lost when they collided with another Lancaster from 115 Squadron – the more ironic, given that despite the collision taking place over Wolsfeld, Kries Bitburg, north west of Trier, 115 Squadron were based at Witchford, some 3 miles from Mepal were 75(NZ) flew from. Fascinatingly, this information is noted in pencil handwriting at the bottom of page 268 of the 1944 Operational Record Book.

The annotation also notes that the crew were initially buried in Wulsfield churchyard, before being moved to the British military cemetery at Rheinberg on the 25th November 1946.

I’ll put out a few feelers on the forums and see if I can find anything about the crew from 115 Squadron…….