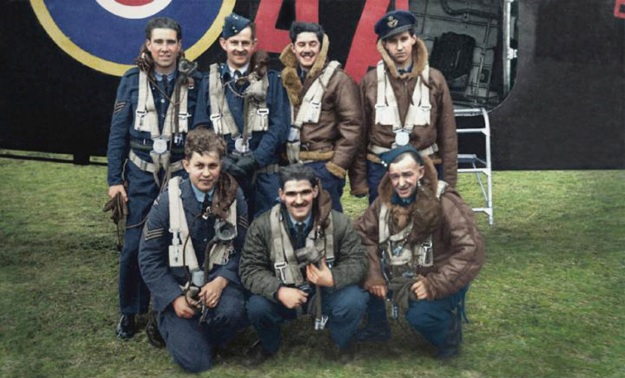 A while ago, I received this amazing colour picture from Kevin King. So far its the only colour image that I have seen related to 75(NZ) Squadron. The image and details of the crew and their crash comes from a Dutch site and the page can be seen here.

Having had a look at the ORB and the details of the raid, I am  inclined to believe that the information on this page is slightly wrong. On the night of the 3rd of February, the crew took Sgt. Andrew James Newell Scott with them to Hamburg, as second Pilot. To this end, I think that this picture is of the ‘Blincoe crew’ and is very unlikely to contain Sgt. Scott.

I appreciate my contention regarding the individuals in the picture is a little controversial, I look forward to being proved wrong, but my gut feeling says that I am not.

It was not a good night for the Squadron. As well as the Blincoe crew, P/O John McCullough and his crew, including Raymond Willaim Henderson as 2nd Pilot were also lost. The 2 captains were amongst the most experienced in the Squadron. and the loss of 2 2nd Pilots meant the following morning 2 ‘headless’ crews remained.

The crew on that night were;
Plt Off Kenneth Howard Blincoe, DFC, RNZAF NZ412194 Pilot. Age 33.
Citation DFC (24 Apr 1945 to date from 3 Feb 1943):
“This officer is a most enthusiastic captain of aircraft and has completed many operational sorties, mostly against well defended targets. He has always been most determined in all his attacks and has set an example of the highest order to his crew“.

F/O Harold Lowe, DFC, RAFVR 905609/ 115129 Wireless Operator. Age 23.
Citation DFC (24 April 1945 to date from 2 Feb 1943):
“This officer has participated in many operational sorties, the majority of which have been against strongly defended German targets. He has always shown great courage and determination in the face of the enemy and his work in the Squadron has been of the highest order and an example to all. Died Wednesday 3rd February 1943, age 23, during a raid on Hamburg“.