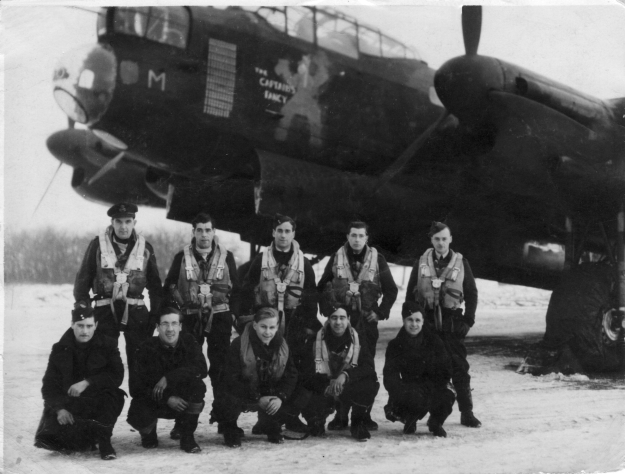 I am amazingly pleased to say that Tony, son of Richard Pickup, Wireless Operator with the Bailey crew during their second tour, has passed to me a copy of the memoirs of the crew’s Air Bomber Jack Wall.

Jack completed a total of 50 Ops during 2 tours with 75(NZ) squadron between 1943 and 1945 – both with Jack Bailey, who was to become ‘C’ Flight O/C in 1945. Their second tour is inextricably linked to Lancaster Mk.III NE181 ‘The Captains Fancy’ JN-M, completing the aircraft’s 100th Op – the only aircraft in 75(NZ) Squadron to reach its century.

Tony has tried for some time to make contact with surviving relatives of Jack, but it would appear to date to be to no avail. We have discussed the document and we feel that until or if, someone related to Jack steps forward, we will attribute all copyright of these memoirs to Jack Wall himself. Also, in order that a relative is able to have an ‘original copy’ in its entirety , the original hand typed pages of the memoirs will be reproduced as text, not as images of the pages – only photographs and documents that perhaps nearly all actually have Crown copyright (which will now be expired) will be directly reproduced.

This is, relative to my experience at least, a very big document. There seems little point in attempting to post it in one go – not only would it create an astonishingly large single post, the honest likelihood is that many facts and tales would simply be lost to a reader on one sitting. To this end, I have decided to break it down to a number of installments – hopefully this will allow individual stories and recollections to ‘breathe’ a little better during a reading. I will try to build up a ‘head’ of posts and will let the blog automatically release them over each day till we have seen it all. A lot of the document is typed recollections, but there are also copies of documents and photographs that I am sure you will all find fascinating.