NE181, JN-Mike – ‘The Captains Fancy’ holds a special fascination with 75(NZ) Squadron as it was the only aircraft in the Squadron to pass its ‘century’ of completed Operations. Perhaps inevitably because of this ‘fame’ there is a degree of ‘fogginess’ that exists around the aircraft, regarding the exact number of OPs credited to it and even in some quarters, what crew and what date the magic figure of 100 Ops final was recorded. Certainly yesterdays post makes it clear from Jack’s and no doubt the entire Bailey crew that it was them!

(Original caption from Jack Wall); 75(N.Z.) Squadron – Mepal. The Captains Fancy prior to the Air Ministry order that the majority of the figure was to be blacked out as it was too visible at night……
NE181 sporting a ‘brighter’ version of ‘The Captains Fancy’ nose art, after her 51st Op, which was to Calais, 20th September 44, piloted by S/L Williamson.

The picture below showing The Captains Fancy prior to her 100th Op with a clearly ‘blacked out’ version of the original artwork…….. 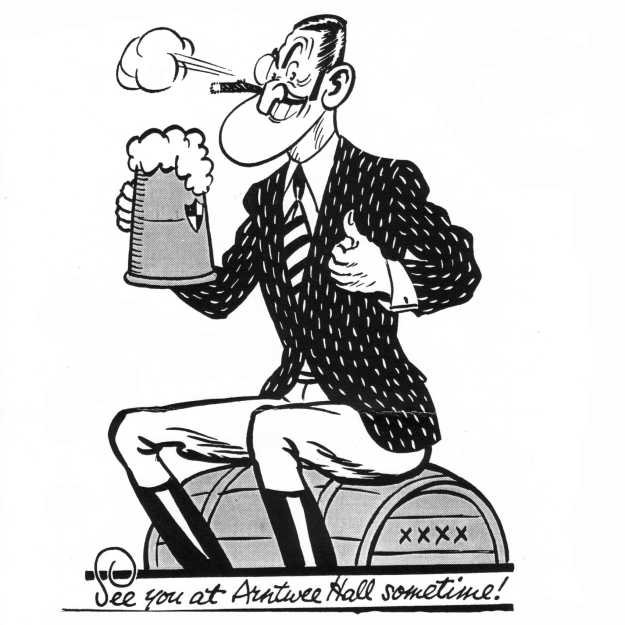 An image supplied by Mirror Group Newspapers, dated 27th July 1988; ‘We are enclosing with our compliments a copy of the cartoon character which you requested. He is Capt. Reilly-Ffoul, and he appeared in our ‘Just Jake’ strip during the 1939-45 war.’

Air Ministry Bulletin announcing the award of a Bar to Jack Bailey’s D.F.C., won during the Osterfeld OP
Jack Wall’s Recollections of the OSTLEFELD Opoeration;
This was a daylight raid and we led the flight formation – this was probably why we had so much flak aimed at the aircraft. When the other aircraft in the formation saw our bomb doors open they opened theirs and when they saw our bombs start to fall they followed with theirs. If we had been shot down they were instructed to bomb on their own. We did take a battering and Jack had to feather one engine over the target. However he still managed to fly straight and level for our bombing run and I have a good photo of the bombing in my small collection. Our load was 1×8,000 lb., 6×500 lb., and 1×250 lb. Bombs. When we landed it was found that we had been hit in all engines and had a total of 57 holes in various sizes. However no one was injured and all 21 Aircraft from the Squadron that took part returned
safely I cannot remember if any others were hit by flak; It was for his skill and courage on this operation that Jack was awarded the Bar to his D.F.C. – John was always known as Jack. 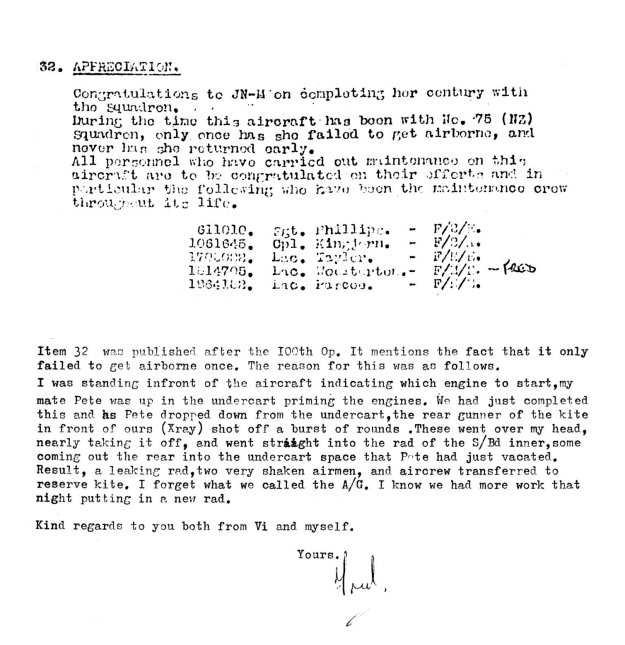 A letter from Fred Woolerton, one of the ground crew that looked after NE181 throughout her stay at Mepal. The first part is an extract from an Air Ministry Bulletin, sent by Fred to Jack, the second part an explanation from Fred why ‘The Captains Fancy’ missed that one Op…….