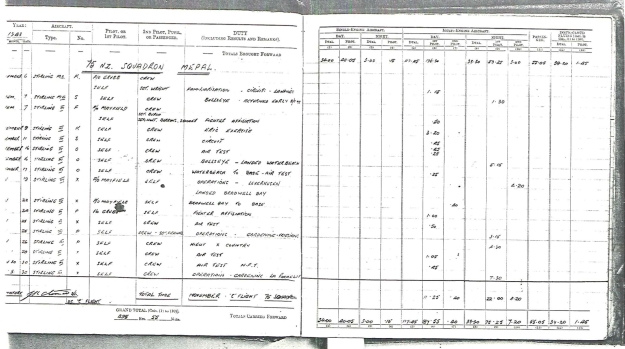 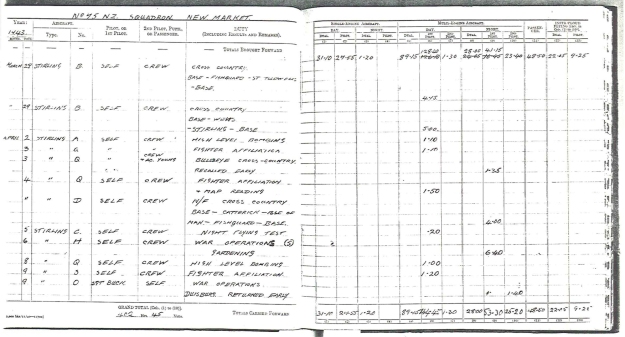 Arrival page of Keith Halliburton, Pilot. Keith and all of his crew were lost on a Gardening Op to Kiel Bay on the 28th April 1943. 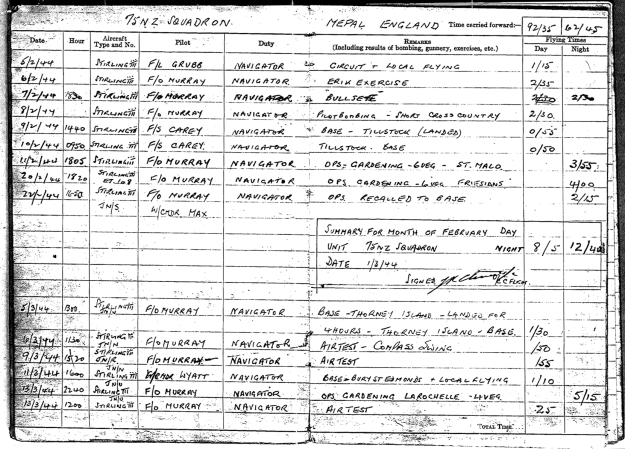 Arrival page for John McFarland, Navigator with the Murray crew. Shot down on the night of 18/19th April 1944 on a Gardening Op to Kiel Bay. John and the Air Bomber, Douglas Hill were the only survivors and spent the remainder of the war as PoW’s. 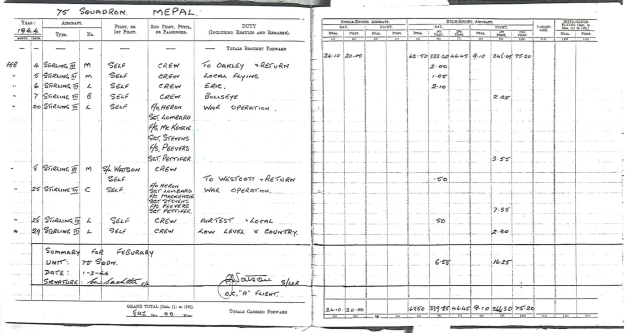 Arrival page for Euan Sachtler, Pilot. Euan and the rest of his crew were lost on the night of 2nd May 1944 on the Chambly Op.

Many many thanks to Steve for passing on these log book pages from 4 airmen who served with 75(NZ) Squadron. Steve cannot recall how he came by these pages, but once I had looked through them, I was astonished (again) by the chance and coincidence of the pages he had sent to me.

The first set of pages comes from the logbook of Arthur Russell Young. Arthur completed his 2nd dickie Op with the Mayfield crew on the 19th November to Leverkusen. Whilst Dad and the rest of the boys didn’t know it, this was to be their last Op with the Squadron before being screened – a certain irony therefore that it was Arthur’s first!
View the pages from Arthur’s logbook here

The second logbook is Keith Halliburton’s. Keith and the rest of his crew were lost on the 28th April 1943 on a gardening Op to Kiel Bay. I know the relatives of both David Church, Wireless Operator and Devinder Singh Sidhu, the Flight Engineer with the crew. All of the crew are commemorated on Panel 147 Runnymede Memorial. I hope Dave, Michael and Tony find this little fragment of their shared history of interest.
View the pages from Keith’s logbook here

The third logbook took a little bit of digging to establish the identity of the navigator (partly because the other 3 had the owners names written at the foot of the first page……..:P).
I was astonished to discover it was from the logbook of John McFarland, Navigator with the Murray crew – John’s grand daughter had only contacted me some 2 weeks ago about her grand father and his time in with the Squadron and I had in fact managed to get John to sign my copy of ‘Forever Strong’ the previous November at the UK Squadron Association reunion…….
View the pages from John’s logbook here

The final logbook pages are those of Euan Sachtler, Pilot who was lost with all of his crew on the 2nd May 1944, during a raid on Chambly.
View the pages from Euan’s logbook here