Photograph from “Lou Woodward”. Chris doesn’t think that this is one of the ‘Woodwards’ that served in 75(NZ) as their dates of activity with the Squadron are before Tapua’s arrival.

Chris passed 3 more fantastic pictures of ‘Tap’ Hepari on to me, so I thought it was worth doing a separate post to present them, after adding the image in the  post to the ‘Maori aircrew who served with 75(NZ) Squadron 39-45‘ page of the blog.

We believe all of these pictures of Tap to have been taken before his arrival at 75(NZ), simply because the original attribution of the images are not names found in the Squadron Nominal Roll – so perhaps  when he was training in Canada, or just after his arrival in the UK, prior to posting to Mepal.

As always, if you have any information on these images, please get in contact!

Photo from “Ian Petrie”, but no individual by that name in the 75(NZ) nominal roll, so perhaps this guy and Tap trained together before Tap arrived at the Squadron…? 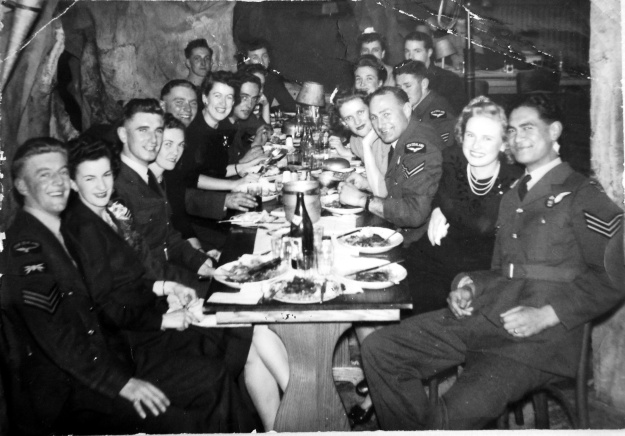 Another photograph from “Lou Woodward”. Both Tap and the individual at front left are W/Op’s, so possibly a group of W/Op’s out on the town.