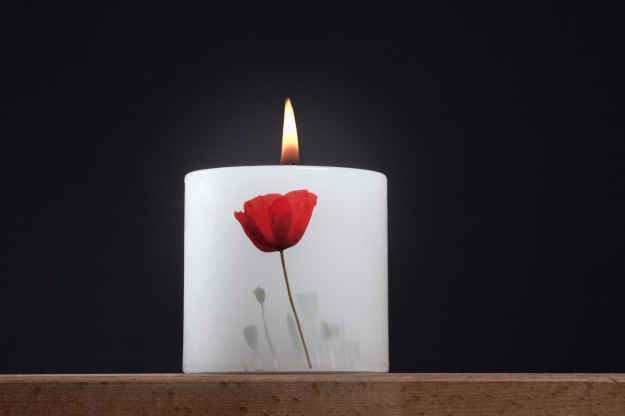 “lamps are going out all over Europe; we shall not see them lit again in our lifetime”.

That war, which became known as the ‘Great War’ and later the ‘First World War’, lasted just over four years, resulting in 888,246 British and Empire fatalities. It was arguably the most devastating event of the 20th Century, affecting virtually every family in the country.

Tonight, the 4th of August 2014, a hundred years later, the nation will commemorate the start of the Great War and the loss of so many lives with the  ‘Lights Out’ campaign.

Between 10.00pm and 11.00pm (BST) tonight, turn all of your house or building lights off and light a candle to commemorate the start of World War I.

This post is not about just remembering the start of the Great War – we should never forget that the life expectancy for an airman in Bomber Command was the same as that of an infantryman in the trenches of  the First World War.

With proud thanksgiving, a mother for her children,
England mourns for her dead across the sea.
Flesh of her flesh they were, spirit of her spirit,
Fallen in the cause of the free.

Solemn the drums thrill: Death august and royal
Sings sorrow up into immortal spheres.
There is music in the midst of desolation
And a glory that shines upon our tears.

They went with songs to the battle, they were young,
Straight of limb, true of eye, steady and aglow.
They were staunch to the end against odds uncounted,
They fell with their faces to the foe.

They shall grow not old, as we that are left grow old:
Age shall not weary them, nor the years condemn.
At the going down of the sun and in the morning
We will remember them.

They mingle not with their laughing comrades again;
They sit no more at familiar tables of home;
They have no lot in our labour of the day-time;
They sleep beyond England’s foam.

But where our desires are and our hopes profound,
Felt as a well-spring that is hidden from sight,
To the innermost heart of their own land they are known
As the stars are known to the Night;

Ongoing appreciation to Philip for the donation of further images from his gravestone collection, this time of 2 members of the Squadron, who lay in  Harderwijk General Cemetery, Netherlands.

On the 29th July 1942, a combined force of 256 aircraft were sent to Hamburg. Whilst comprising of various Squadrons from 3 Group, it also utilised 91 aircraft from Operational Training Units. Originally, a larger force was planned, but as bad weather closed in over airfields, other Groups were unable to participate. The weather progressively worsened as the participating aircraft flew on their outbound journey to Hamburg – all of the OTU aircraft were recalled, however 3 aircraft failed to receive the instruction and continued to the target. By the time the target was reached, the attack force comprised of only  68 aircraft from Group. The casualties for Bomber command that night were high – 9 Stirlings and of the force of 17 Wellingtons sent from 75(NZ) Squadron RAF, 6 failed to return (this was of 16 Wellingtons lost overall from Group).

Wellington Mk III, BJ661,  was shot down by a German Junkers 88 nachtjagd at approximately 03.05hrs into the Ijsselmeer, near Amsterdam, whilst inbound, following the Hamburg raid. The Ju. 88 crew was Lieutenant Wofgang Küthe and his gunner, Unteroffizier Helmut Bonk (IV./NJG1). Orbit Wolfgang Küthe was killed in a flying accident 14th April 1944, having been credited with 8 kills.

Of the crew of BJ661, only Ronald Callahan the Wireless Operator, and Alan Rutherford the Front Gunner, survived the crash – floating free, supported by their life vests – they were later rescued and sent to a POW camp.

The bodies of the Pilot, John Gilbertson and Observer, Martin Byrne  were recovered from the wreck and buried in Amsterdam New Eastern Cemetery. William Titcomb, the crew’s Rear Gunner, floated free of the wreckage and his body was recovered later some distance from the crash site.

Stirling Mk III BK768 AA-L fell victim to a Zahme Sau (tame boar) – the German night-fighter defensive system, operating as a series of radar-controlled boxes within which the fighters circulated waiting for Allied bombers to enter their ‘box’, along the Netherland/Belgium coast. Following a night-fighter attack, the Stirling crashed into the Ijsselmeer – there were no survivors.

The body of Gordon Thomson, the Navigator was washed ashore on the 4th of July near Harderwijk, where he was buried.