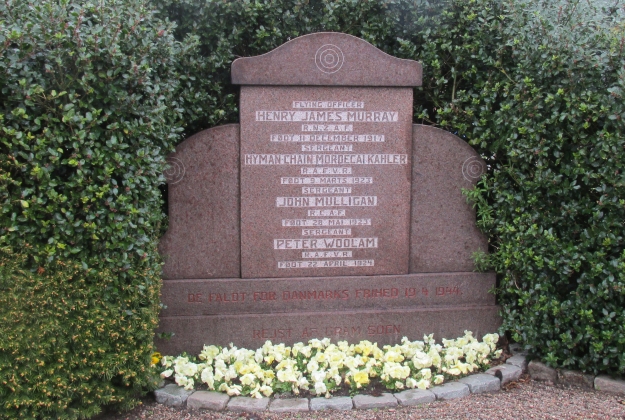 Many thanks to David for passing on these photographs of the gravestones of the Murray crew who were killed on the 17th of April 1944. The photographs were taken on a visit to the Churchyard to commemorate the loss of the crew in April this year.

On the 17th of April 1944 at approximately 20 minutes to nine in the evening 7 Stirling Bombers began to leave Mepal to join a total force of 168 aircraft for a large scale Gardening Op to Swinemünde, Kiel Bay,and to the Danish coast.

Stirling Mk III EH955 AA-K was shot down by a night-fighter over Denmark on the return flight to base at 14,000ft. The Navigator, John McFarland recalls his navigators desk ‘exploding in front of him’ as the cannon shells, very possibly from a Schräge Musik equipped Nacht Jagd ripped through the aircraft.

Tragically, the crew volunteered for this Op, believing that having just converted to Lancasters, a Gardening Op in a Stirling would be an easy extra Op for their tour.

The crew’s Navigator, Air bomber and Wireless Operator all succeeded in baling out and were captured as Prisoners of War.

F/S Douglas John Hill RNZAF NZ415761. Air Bomber.
Doug Hill had a miraculous escape when his parachute harness, which was cut by a burst of fire from the night fighter, came off. His left foot caught in the harness and he descended hanging by his foot.
Prisoner of War No. 3550. Prisoner of War camps – Dulag Luft, Stalags Luft VI and 357. Returned to the United Kingdom 6th May 1945.