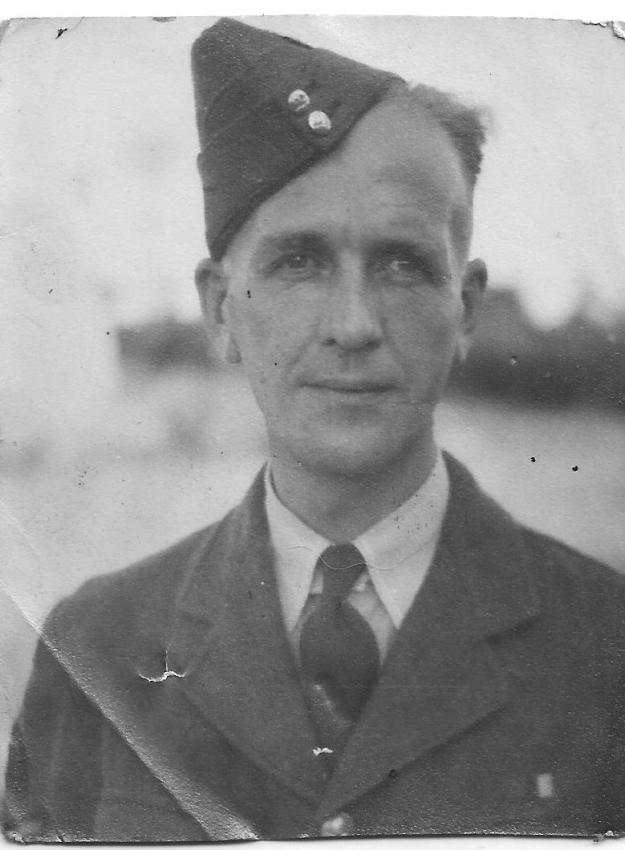 Many thanks to Malcolm for making contact and sending these wonderful pictures of his Father, Ron Wood, who was a Radar Technician with the Squadron at Mepal between September 1943 and his demob in August 1945. ©

Ronald enlisted in the RAF in March 1939 and Malcolm recalls the family being on a holiday in Anglesey, when on the 1st of September his Father received a telegram that cut the holiday short and required Ron to don his uniform. His first posting was to 924 Squadron, manning barrage ballons in the Manchester area, particularly Trafford Park – not far from where the Wood family lived. Whilst Malcolm was too young to realise the potential seriousness of the situation – he is sure it was a massive worry to his Mother, when in February 1940, Ronald was transferred to France.

Approximately 2 weeks after the Allied evacuation of Dunkirk Ron and his comrades left St. Malo, in a fishing boat in a rather rough journey back across the Channel. Arriving back in the UK on the 18th of June, he came straight back home on leave and Malcolm remembers being extremely disappointed that his Father did not have a rifle!

On his return to the UK, he continued with 924 Squadron at Eastleigh. After it was decided that the WAAF would take over Barrage Balloon duties, Ron went to Signals School which Malcolm recalls was near the Tower of London (Malcolm also says that Ron mentioned playing football in the Tower of London moat!) , perhaps at the University of London, and was retrained as a Radar Technician – something Ron would have been very pleased with, given his fascination with radio from a very early age. 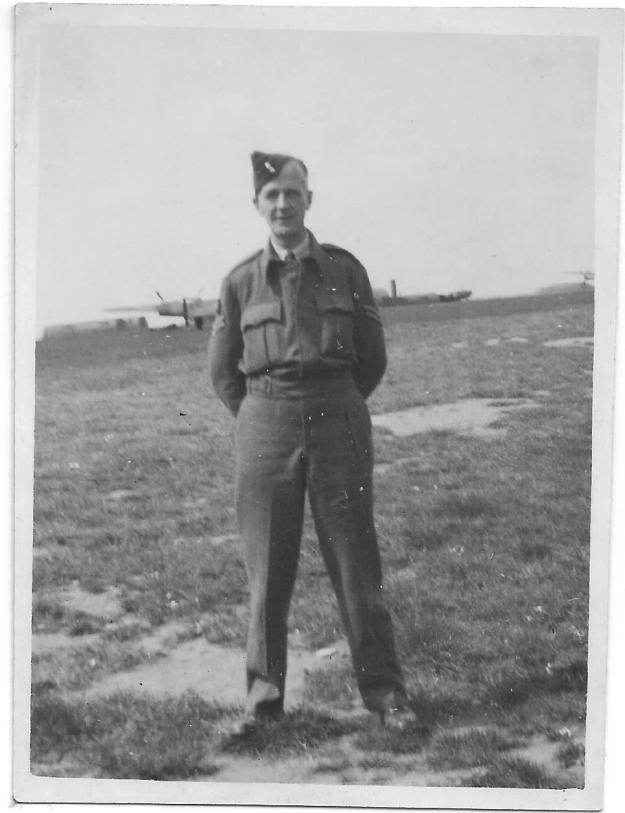 Ron stood, we presume at Mepal with a Lancaster of the Squadron in the background. © Malcolm Wood.

After 9 months of training, Ron arrived at Mepal to maintain radar equipment in September 1943, only a few months after 75(NZ) Squadron also had arrived at the new airfield.

Ron remembered Mepal as a sleepy, one pub, one shop village where you could get a puncture repair kit and not much else! – Perhaps a useful item given that bicycles were used extensively on and off the airbase. After the War, Malcolm remembers his Father saying that he had a ride in a Squadron aircraft to view the effects of the Allied bombing campaign. 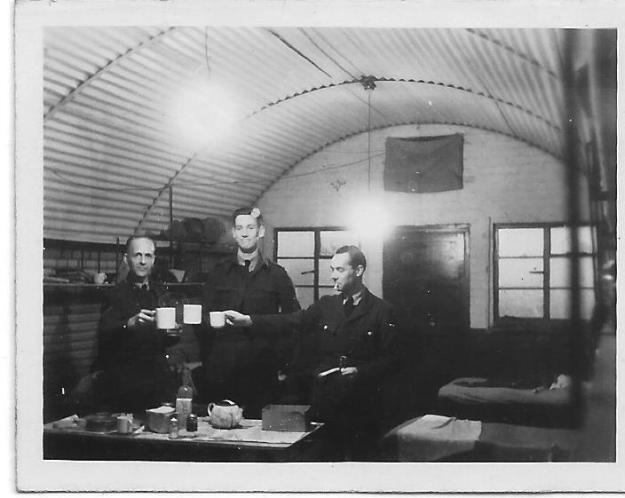 Ron, stood to the left, with 2 unknown technical or ground crew at Mepal. © Malcolm Wood.

Another view of life in a nissan hut at Mepal with other technical. ground crew. © Malcolm Wood.

The only souvenirs of his time at Mepal, which Malcolm still has was some jewellery, fashioned from Perspex and two cannon shells – placed in a vice, the bullet and cordite would be removed before the detonator was struck with a punch and a hammer to fully deactivate it.

It exists without debate that the Ground and Technical crews performed a critical and perhaps nowadays a forgotten contribution to the Squadrons of Bomber Command and as such, perhaps the stresses and anxieties of that time were just as acute for them. Ron, according to Malcolm never did anything with his campaign medals or his Air Efficiency Award, all still being in their original delivery boxes when Malcolm had them mounted, to wear with pride as a son of one of the brave men of the RAF.