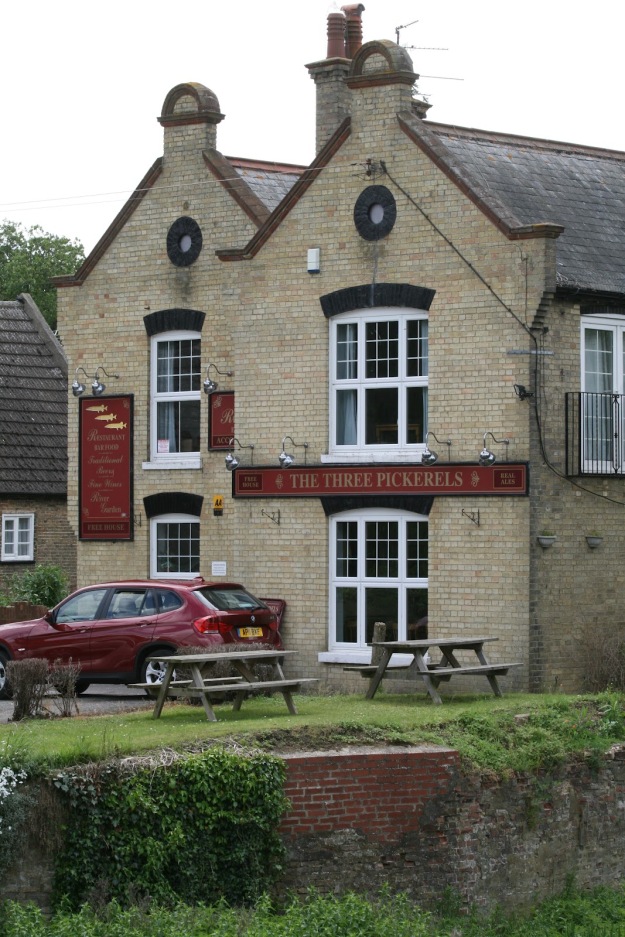 A picture from across the bridge looing back at the front of The Three Pickerells, in Mepal.
robertalfredjay.blogspot.com

I must confess when we all first went to Mepal for  our first Remembrance Sunday, I was very much looking forward to going to ‘The Three Pickerells’, having read about it in Harry Yate’s wonderful account of his stay with the Squadron called “Luck and a Lancaster”. On arriving and going in I was gutted to discover that there was nothing in the pub, apart a small photograph that somebody had apparently left of Jake Aitken’s crew – ironic as it contained, of course, Ron Mayhill, the author on another book that features The Three Pickerells……..

The owners have changed since this first visit and when Bev and I stayed this time last year for a night before the Reunion, I asked Emily whether she would like a few pictures and wonderfully she said yes. Now I must confess, it took longer than I had hoped, but the pictures and frames finally went back down with us for the Mepal Retro event at the end of the summer and Emily
picked 3 to put up in the pub.

a little reminder of the Squadron Association with The Three Pickerells, on display in the restaurant section of the pub

I think its great that there is something back on the walls that records the association the boys from the Squadron had with the ‘Pickerells and to be able to remind visitors that the pub is mentioned in both Ron’s and Harry’s books.

Emily says the visitors to the pub love to read the information on the Squadron and if in this way the Squadron is remembered by someone with a drink in their hand – I think the boys would approve!

The Three Pickerels was a regular watering hole for the crews from 75(NZ) Squadron as well as perhaps other local Squadrons such as 115, based just up the road at Witchford.

From “Luck and a Lancaster – Chance and survival in World War II” by Harry Yates:

“At briefing , seventeen aircrews were detailed bombing sorties to Brunswick, Russelsheim and Falaise, while six more would lay mines in the Gironde Estuary. But F/O Yates and his crew spent the evening peppering the dart board at The Three Pickerels , a favourite watering hole of both Mepal and Witchford crews. At nine-thirty the noise of Merlins interrupted out game. We took our drinks outside to toast our colleagues. One hundred and sixty-one of them took off from Mepal that night. The seven from P/O Mulcahy’s crew disappeared without trace………”

From “Bombs on Target – A compelling eye witness account of Bomber Command operations” by Ron Mayhill:

“That afternoon Dunc and I cycled a couple of miles around the air field boundary to a strategic spot just beyond the main runway where there was a permanent gap in the hedge, to get photos of Lancs taking off and landing during air tests for the night’s operations.

We took some great action close-ups with full flaps and undercart down, and then discreetly rode onto Sutton, very much aware cameras weren’t allowed around the station. It was the first time we had seen the Fen villages and farms from the ground and they were a lot more interesting than we had thought, everything looked flat and featureless from the air.

The War seemed far away as we cycled slowly back to Mepal village and the picturesque pub The Three Pickerels, aglow, weary yet invigorated”.

If anybody would like either or both of the images above, just let me know and I will send you print quality pdf’s with crop marks for mounting – they mount and fit in an IKEA frame (nothing to do with Bev being a consultant for IKEA of course…..)