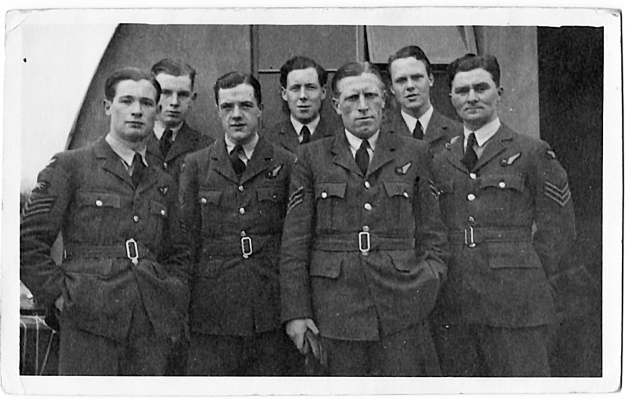 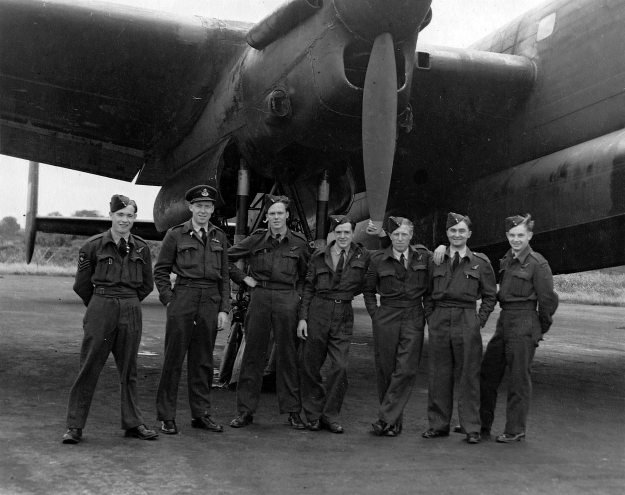 The “Dead-Beats” re-mustered at Oakington with No.7 P.F.F. in October 1944.
Image supplied by Lindsey Wainwright

Many thanks to Lindsey for providing these 2 fantastic pictures of her Father and his crew for the Wainwright crew page. Johnny and the boys arrived at Mepal from 1657 Conversion Unit on the 27th of December 1943, flying their first Op on the 2nd of January 1944, Gardening in the Frisian Islands. The crew completed 23 Ops, including 3 SOE sorties, initially flying Stirlings, before converting with the rest of the Squadron to Lancasters in March 1944.

The “Dead-Beats” last Op with the Squadron was on the 24th of May with an Op to Aachen. The crew later re mustered at Oakington to fly with No.7 Squadron (P.F.F.)

Lindsey has admitted that, inspired by our very own Vic Jay’s remarkable research into his Father Bob, she has been incredibly lucky to make contact with the son and daughter of Syd Woolley, the crew’s Wireless Operator and also the son of Navigator, John Richards.

Bitten with the bug, she is really keen to try and make contact with other relatives of the crew – particularly those of the two Canadians in the crew  – who knows? – it’s happened before after a blog post!