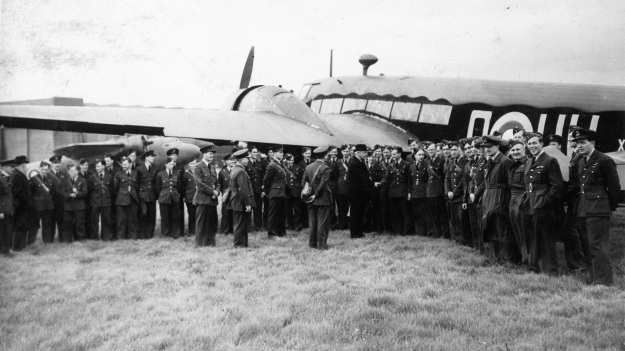 Just recently the Air Force Museum of New Zealand’s Keeper of the Photographs, Matthew O’Sullivan has published a wonderful online collection of beautiful photographs from the Museum’s archives:

Amongst them is this photo, showing a visit by NZ High Commissioner Bill Jordan to 75(NZ) Squadron at Feltwell.

However, the gentleman in the dark suit shaking hands right of centre is clearly the New Zealand Prime Minister of the time, Peter Fraser. Jordan appears to be at far left, also in a dark suit.

A bit of searching of newspaper reports from 1941 has revealed more information.

“Arriving at their station a few hours after their aeroplanes returned from plastering Hanover, Mr Fraser visited the New Zealand bomber squadron.

Among the men he saw was Sergeant Pilot J. A. Ward, V.C..

Mr Fraser said: “New Zealand is very proud of you. I congratulate you heartily on your well deserved honour.”

Mr Fraser was introduced to members of Sergeant Pilot Ward’s crew, including Sergeant Gunner A. R. T. Box, D.F.M., of Auckland, and Sergeant Observer L. A. Lawton, of Wellington.

The squadron paraded in a hangar, and Mr Fraser walked down the lines, shaking hands with every man. He talked with the men in the sergeants’ mess. His audience included more than a dozen winners of D.F.C.’s and D.F.M.’s, who have distinguished themselves over Germany.”

In the photo, Bill Jordan is 2nd to left, and next to him is Sgt James Ward V.C., and then two of his crew mates, skipper S/L Reuben “Ben” Widdowson DFC RCAF (with moustache) and rear gunner Sgt Allan “Shorty” Box DFM RNZAF. Another crew mate, navigator Sgt Joe Lawton RNZAF is identifiable five along from Box, standing at the rear.

In the official party in the foreground, 2nd from left is Station Commander W/C Maurice Buckley, performing one of his final duties before being posted out from Feltwell. PM Fraser (in dark suit) is shaking hands with an unknown airman.

Mr Jordan had also been at Feltwell two nights earlier, when the squadron held a special smoking concert in Jimmy Ward’s honour. 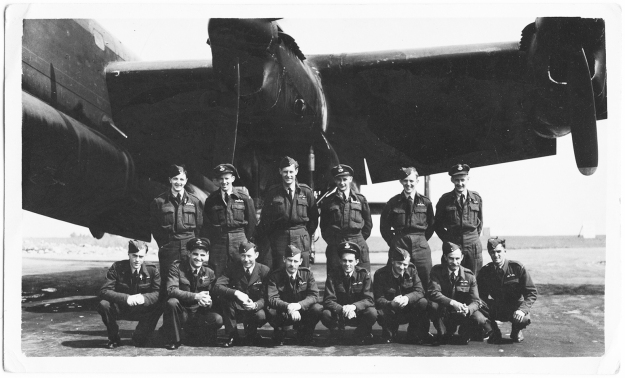 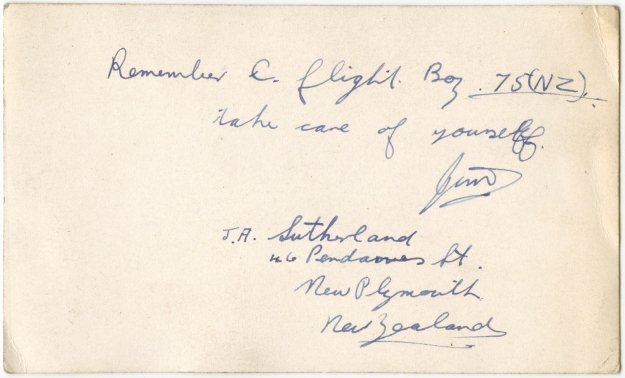 I am really pleased to present what I think, is a ‘never seen before’ photograph of ‘C’ Fight Pilots taken, sometime between June and and September 1945. A quick pass around between Chris and Kevin has suggested some ideas, but at this stage I am happy to present it and add it to the ‘Group Photographs’ section as a numbered version to aid identification of individuals.

I have often resisted the urge to search Ebay for Squadron memorabilia, partly as I know if I started I would not be able to stop! Having said this, I came across this image and despite no response from the seller regarding provenance, I thought it was worth a punt. Thus, I have the original and for anybody who comes across a relative I am happy to supply a ridiculously high resolution digital file for printed output.

Personally, I think the image is that more fascinating, as it’s apparent date places it during the period that 75(NZ) Squadron was transitioning from Bomber Command to “Tiger Force”. We can, obviously be assured that at least one of the Pilots is James Sutherland.

Jimmy completed 2 Post War sorties on the 14th and 25th of June and was then retained to join the ‘new ‘ Squadron. In the absence of any substantial details in the Squadron ORB’s, this period is really a black hole, regarding aircrew details – it might perhaps have been taken just at the transition – I do not know, and until perhaps we have identified some of the individuals in the photograph we shall have to wait to see.

I look forward to any suggestion as to the identities of the airmen in the photograph!

View the numbered, identification version of the photograph here