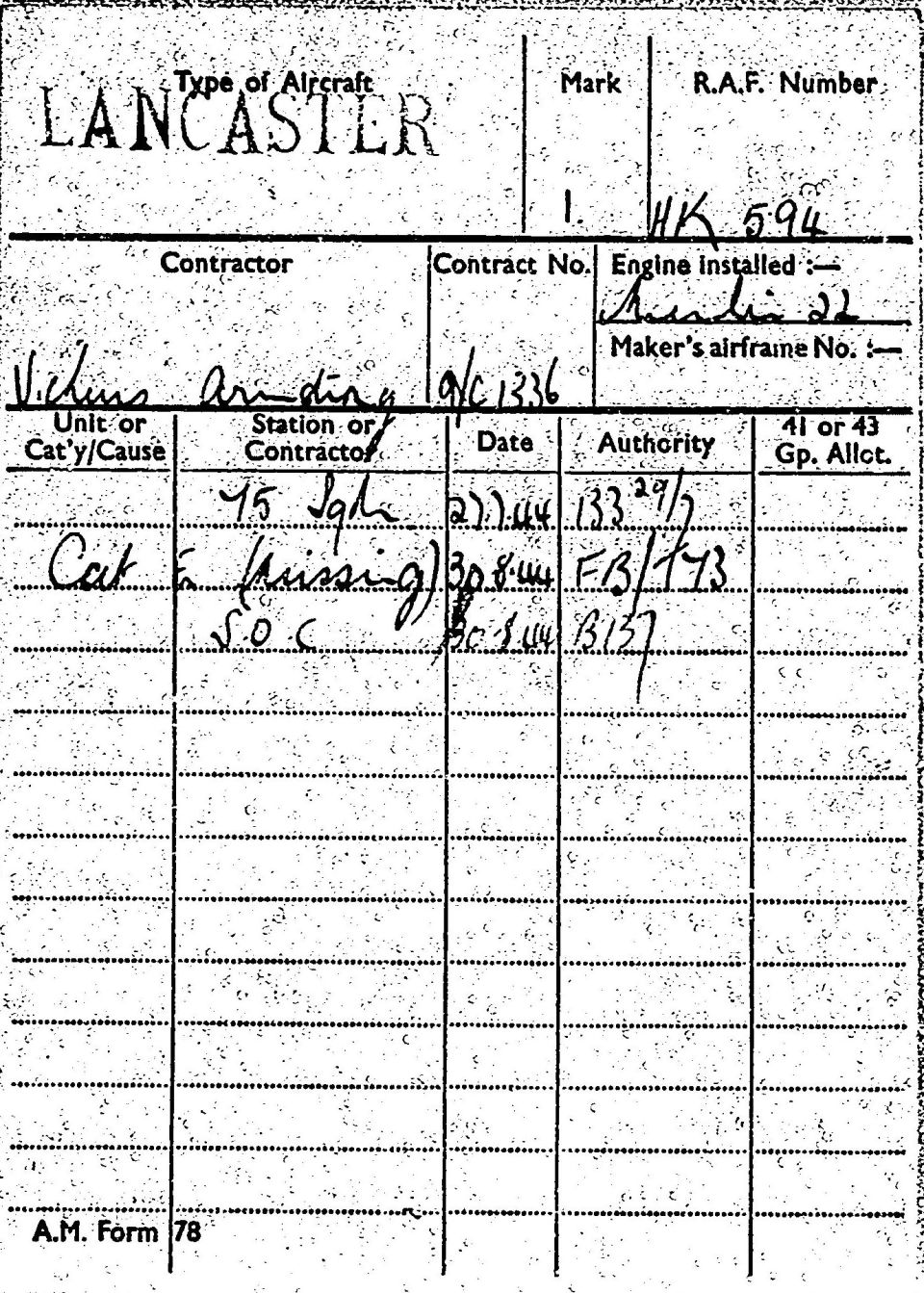 29/08/1944 – Attack Against Stettin
Fourteen aircraft took off as detailed to attack Stettin and thirteen of these successfully bombed the target with the aid of markers. A good concentration of fires developed and all crews reported a successful raid. A.A. opposition was moderate and enemy fighters were active on the outward route. Three of our aircraft had combats, two being inconclusive but the third (Captain NZ428797 .P/O. J. Scott) claimed one enemy aircraft as probably destroyed. The aircraft captained by 1323677 .F/S. King, D., failed to return.

Lancaster Mk.I HK594 AA-G was attacked by a night-fighter at 6,500ft while flying on a South East heading over the Swedish coastline, tracking toward Stettin. Cannon shells shattered the tail and rear turret, killing the gunner instantly. The pilot ordered the crew to bale out when the aircraft became uncontrollable and five of them came down in the Baltic but failed to survive. King left the aircraft shortly after and parachuted down not far from Tollarp Village, while the Lancaster plunged into the ground near Svenskop Village, all its bombs exploding on impact causing substantial damage throughout the neighbourhood. A badly injured F/S King was interrogated by the Swedish Military and later interned at Koranas until being repatriated on 10 October 44. Two bodies from the crew were later found in the water and the rear gunner was still in the aircraft wreckage. They were buried at the Hälsingborg (Palsjo) Municipal Cemetery. The remaining crew members were never found and are commemorated on the Runnymede Memorial

F/Sgt King and his crew had managed to survive the German air defence ordeal over Denmark, Kattegat and the crossing of Swedish defences They were flying at 6500 ft on a south-easterly dog-leg over Sweden down to Bornholm, which was the turning point en-route to Stettin. When passing over the Swedish coastline the aircraft was suddenly hit by cannon- shells. The rear gunner was probably killed outright in this attack. The damage sustained by the aircraft was so serious that the pilot gave the order to bale out. Due to the damaged tail-plane the Lancaster was difficult to control. F/Sgt King tried to turn back so that the crew would be overland and therefore had a greater chance of survival when baling out. Witnesses on the ground, including military personnel saw the bomber being attacked by a night fighter and making a wide turn inland. During this turn five of the crew and drifted down into the Baltic. F/Sgt King left the Lancaster and came down not far from Tollarp village. The Lancaster took the final plunge between two farms north of Svenskop village not more than eighty yards from the nearest house. The crash caused a large explosion as its bomb load went off, which smashed all the windows in the neighbourhood. An adjacent house had all the doors and the roof torn off. F/S King was found by the local Home Guard and he told them that the crew had comprised seven men. A search was started which went on all through the next two days. Sgt. Moon and Hill were found dead in the water outside Ahüs in the morning of Thursday the 30th. The body of Sgt. Causley was found inside the wrecked bomber. No trace of the rest of the crew has ever been found. On being questioned by a Swedish Air Force officer F/S King told the officer that the aircraft must have flown over Sweden due to a navigational error. The Swedish officer commented in his report that F/S King, judging from other remarks he made, must have known that he was crossing Sweden. King gave the officer a few details concerning the attack, he mentioned that the control surfaces in the tail had been severely damaged. This made control of the aircraft very difficult and explained the wide separation of the crew members found. Subsequently a fire had broken had broken out. The crew did not see the German night-fighter. After a couple of nights rest King was sent north by train passing the British Embassy on his way to Falun. He was interned at Korsnas where he arrived on 6th September and stayed in internment until being repatriated on 10th October.
P/O Douglas Arthur Severn King, RAFVR 1323677/ 183954 – Pilot.
Survived, interred in Sweden before being repatriated on the 10th of October 1944 .

Sgt. Derrick Leonard Desmond Moon, RAFVR 1626105 – Mid Upper Gunner.
Killed age 21.
Son Of Leonard Pantry Moon And Edith Emily Moon, Of West Norwood, London.
Buried Helsingborg (Palsjo) Municipal Cemetery, Sweden.     .
Grave location – Coll. grave
Sec. XV. 76-80.
‘To the world, he was only one
But to us
He was all the world.
Mum, dad and Elaine’