Th last page in Gwyn Martin’s logbook recording the 2 flights that would finally bring him home after 3 years as a Prisoner of War.
“Beautiful trip over the ruins of the Ruhr and the upper Rhine valley, Cologne etc. – very gratifying after 3 years”.
“Home at last”.
© David Martin

Following on from the original post about Gwyn Martin, observer with the Curry and Saunders crew, I am very pleased to present Gwyn’s logbook, again, very generously donated to the site by his Son, David.

The logbook as presented covers Gywn’s entire flying career, from training to his first operational tour with 75(NZ) Squadron RAF, through to instructional duties at No.12 Operational Training Unit and finally his second tour posting to 150 Squadron – coming to an abrupt end on the 23rd of October 1942 when Gwyn and his crew were brought down by flak, crash landing in Lake Langavanet, in Norway. He would spend the next 3 years in Stalag Luft III.

There is some interesting notation against certain Ops and looking through his time with 11 O.T.U after his first tour with 75(NZ) Squadron, I couldn’t help but note the names of some of the Pilots going through the training Squadron. Whilst I have no way of knowing if its the same individuals, its interesting to see the surnames as Pilot  of Baigent and Fox to name but two…..

A follow up to my recent post presenting material relating to Gwyn Martin and his crews. Within Gwyn’s second crew Op history are 2 images of Jimmy Ward, relating to the award of his VC. Gwyn and  crew mate Ray Curlewis returned from leave to discover the news of Jimmy’s award of the Victoria Cross:

“We returned to a Feltwell agog with excitement and celebration. Jimmy Ward had received an immediate award of the V.C. for climbing out on to the wing of his aircraft to put out a ﬁre in the starboard engine. The aircraft was under attack by a Ju. 88 night ﬁghter at the time, and he was unable to wear his parachute. They were at 13,000 feet over the Zuider Zee. The rear gunner, Alan (Shorty) Box, won a D.F.M. and the pilot, Ben Widdowson, a D.F.C. Joe Lawton, the navigator, was overlooked in the handout of awards, in spite of his having made a significant contribution to the success of Jimmy’s brave wing walk.”

At the time of receiving the above photograph, I knew I had not seen it before and this feeling was at least also confirmed by Chris when he saw the post.

Thanks to Chris we also now have a few more names for the individuals in the photograph. Based on my original caption (which is now updated in the Saunders Op’s page), here is a new caption with input from Chris:

Another addition to the Ward story arrived from Gwyn’s son, David this morning – a menu of the celebratory meal described in an extract from “New Zealanders in the Air War” by Allan W. Mitchell which was posted 3 years ago, which can be read here.

As David notes – ” everything that any self-respecting Airman could possibly want!” 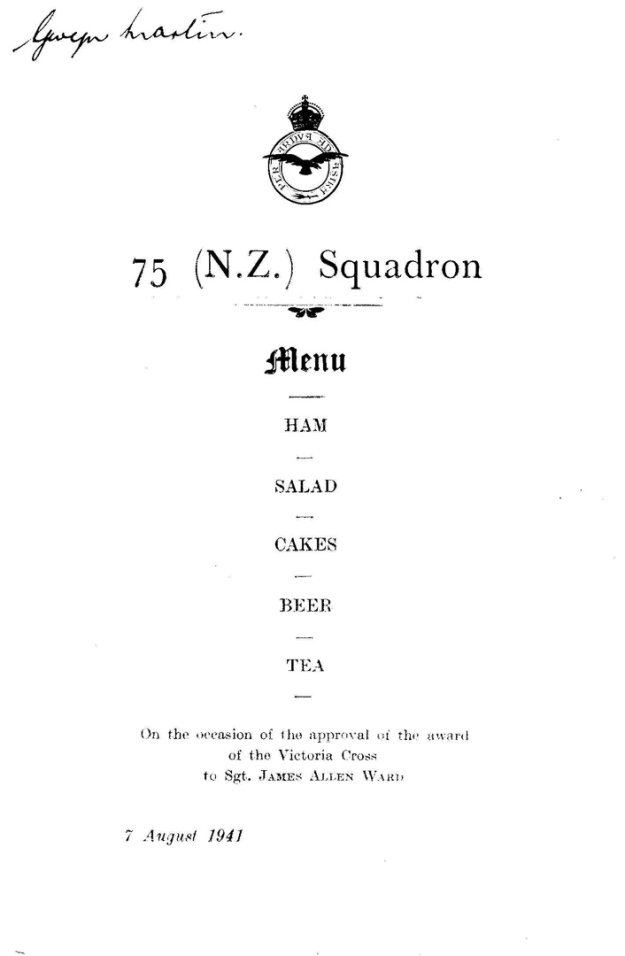 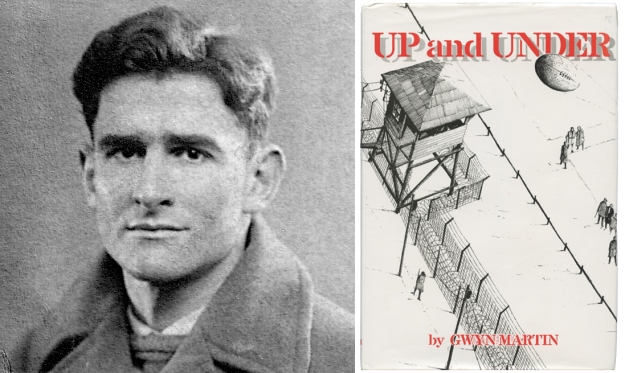 I am indebted to David Martin for the permission to present images and extracts from his Father’s book “Up and Under”.

Gwyn Martin was born in Penygraig, Rhondda in 1921 and was still at school when he volunteered for the RAF in September 1939. He flew 50 bombing missions over Europe and was awarded the DFM in 1941 after the raid on Brest. On the day after his 21st birthday, in October 1942, he was shot down in Norway and crashed into a lake. He then spent the next two and a half years in Stalag Luft III in Poland as a prisoner of war.

After his release from the RAF he attended university and in 1948 qualified as a pharmacist. In 1946 he married Jane Marjorie Lloyd from Aberystwyth and they both ran ‘Taylor Lloyd, the chemists’, in Great Darkgate Street, Aberystwyth, until their retirement.

A keen rugby played, Gwyn played for Cardiff RFC, Aberavon and Llanelli, and, while a student, appeared in the Welsh Final Trials of 1946-7. He was Captain of Aberystwyth RFC 1948-51 and President from 1982 onwards. He was a founder member of Aberystwyth RAFA and elected a life member.

For 18 years he was the Honorary Secretary of the Aberystwyth branch of the RNLI and then became their President. A keen and distinguished photographer, he was President of Aberystwyth Camera Club from 1958 onwards. Gwyn’s photographs are extensively represented in the collections of the National Library of Wales and the University of Wales, Aberystwyth. His autobiography, from 1939-1945, Up and Under, was published in 1989.

Gwyn Martin arrived at Feltwell on the 10th of April 1941 to join 75(NZ) Squadron RAF. With the extended role of a 2nd Pilot at this early part of the War, Gwyn and the other members of his crew essentially had 2 Pilots. Within the format of these Crew Op History pages, a link is provided at the foot of the Curry crew, that will take you onto the crew’s second Pilot, Tony Saunders.

After completing his first Tour with 75(NZ) Squadron RAF, disillusioned and spent, Gwyn resisted the requests for him to stay with the Squadron. After a stint as an instructor he returned to Operations with 150 Squadron and on the 23rd of October 1943, he and his crew were shot down, crash landing in Lake Langavanet, in Norway. He would spend the next 3 years in Stalag Luft III.

David has generously given me permission to use chapters relating to Gwyn’s time with 75(NZ) Squadron within these histories and his copyright of this material should be noted. “Up and Under” can be found on Amazon in both physical and eBook format.

Whilst the addition of the chapter extracts makes the 2 crew histories a significant read, I would encourage you all to take the time to enjoy the extra details of Ops and Gwyn’s personal recollections of his comrades and personalities from Feltwell from that period in 1941. 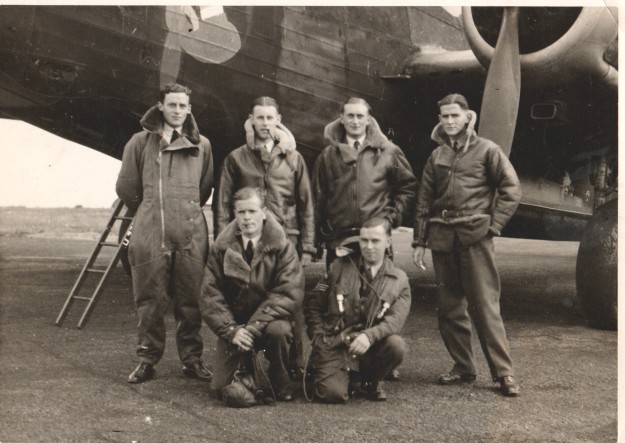 A continuation of Gwyn’s story will be posted at a later date, which will continue from his departure from Feltwell to the day he returned to Norway to once again visit the remains of the Wellington he crashed in, some 50 years before.

To begin Gwyn’s story begin with the Curry crew Operational history page here.
To Jump to the second part of Gwyn’s time with the Squadron, as part of Tony Saunders crew, go here.