A number of people have passed on the link at the bottom of this post that shows an article form TVNZ One News about a moving reunion for the Niece of Brian Roche who was killed with 4 other members of his crew when their Lancaster crashed in a potato field in Heythuysen in Holland. The villagers have remembered the airmen every year since, but it was only this year that Brian’s Niece, Sharnee McGill travelled from New Zealand to take part in the remembrance ceremony. Here she met Ria Schmeider, whose Father had arrived at the crashed aircraft to discover a suitcase full of sensitive navigation documents. At personal risk to himself and his family, he kept and hid the documents from the Germans.

The Roche crew’s Lancaster crashed on its return from Homberg – one of seven aircraft lost on the nightmare Op to this target on the 21st July 1944 – the Squadrons highest single loss total during the War.

Regular readers of the blog will recognise Mark’s name, as it featured rather heavily leading up to last Novembers Winter 75(NZ) Squadron Association reunion. Mark’s Grandfather was Jack Bell, Navigator with Ronald Gordon’s crew, one of 3 aircraft lost on the 20th November 1944 on one of the trips to what is widely recognised as 75(NZ) Squadron’s ‘bogey’ target, the Fischer Tropsch oil refinery at Homberg.

This is a video Mark has made with Ed Pitt on a trip to try to discover lost relatives. Starting in the fields of France, Mark travels to Reichswald War Cemetery in Berlin to see his Grandfather, John Bell’s grave for the first time, then to East Kirby to sit in a Lancaster with Hamish Ottway, the grandson of Bill Ottway, Mark’s Grandfather’s Wireless Operator, who, owing to a throat infection was prevented from flying with his crew on the 18th fateful Op to Homberg on the 21st November 1944. The film then finishes with the first public performance of ‘Forever Fallen’, a song that Mark wrote with Gita Langley for Jack, at the 2013 Winter Friends of 75(NZ) Squadron Association reunion.

This is the full version of ‘Forever Fallen’ – purchase it on iTunes and money goes to the Poppy Appeal and also, the  75(NZ) Squadron Memorial Garden in Mepal. 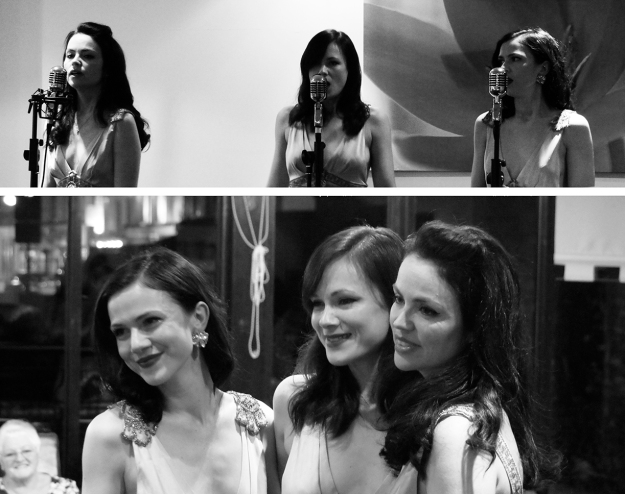 The clear highlight of Saturday evening was the first public performance of ‘The Garden of Mepal – ‘Forever Fallen” by the Langley Sisters.

I have already made posts on the song, but it was particularly special to be lucky enough to be present to hear it sung live and I am sure everybody present would join with me in thanking The Langley Sisters for making the journey to the reunion to perform the song.

The inspiration for the song was Mark’s Grandfather and his loss on the morning of the 21st November 1944 whilst on an Op to Homberg. Written by Mark and Gita, 20% of the sales of the song will be donated to the Mepal Memorial Garden for 75(NZ) Squadron and the British Legion Poppy Appeal.

Personally I think the song is beautiful, but to be honest I am not bothered if you like it or not – you should still buy it because it contributes monies to 2 important funds.

To buy the record (both vocal and instrumental versions), go to the iTunes store (other digital music outlets also exist). Mark has also asked that if you do buy it, to also rate it and leave feedback. If you know someone who would like it, but might not be able to access or use the necessary technology to download it themselves, then buy a copy for them as well!

Below is the accompanying video for the song

And here is another song The Langley Sisters performed on Saturday night.

Many thank to Hubert for ‘recreating’ this approximate Op route for the Homberg Op, 20th November 1944. What is perhaps more remarkable, given the current activity on the blog, is that Hubert is the son of Hubert Rees, the captain of PB520 AA-G, the third aircraft to be lost from 75(NZ) Squadron on this Op. Hubert and the rest of his crew managed to bale out from the aircraft – all surviving and spending the rest of the war as PoW’s. The Rees crew that night were;

Hubert’s plot is based on a copy of an original route map of his Father’s and the original plotted course to/ from Sint Truden in Belgium can be seen in black on the map.

Hubert has slightly revised the plotted route (based on the coordinates I received from Department of Research and Information Services, Royal Air Force Museum, London, last week –  he has moved the actual target from Homberg to the Meerbeck Synthetic Oil Plant of Rheinpreussen, located at the western edge of the village of Meerbeck about three miles northwest of Homberg. Hubert adds to his map the following observations;

‘I would hope that my web-derived lat/long approximations for Diss, Orfordness and Mepal would be viewed as credible but ‘non-critical’.  However, I now realise that my approximation for the Target location might be viewed otherwise.  Historical references to the district of Homberg (the centre of which I earlier used to derive an approximate location) appear to represent a short way of describing the actual target, namely the synthetic oil plant at Meerbeck, some 3 miles NW of Homberg.  I still don’t have a lat/long fix for the plant itself, but my approximation is now centred on the district of Meerbeck.

As long as it’s understood that my lat/long approximations for named locations are just that, and not actual fixes used by aircrew at the time, then all will be well with the post, I think.’

Many thanks also to Adrian who proposed a set of converted coordinates that he got to work with Google Maps – much to my frustration I still can’t seem to get the coordinates to show a sensible route over the target – which clearly suggests my second successful attempt at my Cub Scouts Map Reading badge apparently, was an utter fluke…….

I have great pleasure in announcing Mark Rae’s song “The Garden of Mepal ‘Forever Fallen'” is released today. As any of you know who have been following the blog recently and seen the posts of the Gordon crew, Mark’s Grandfather F/O John Robson Bell and the rest of the crew were lost on the 20th November 1944 on the Homberg Op.

The crew’s story has been a fascinating one to help uncover and it has not only allowed me to meet Mark and Anthony, the son of Sgt. Carl ‘Bob’ Freeman, the Flight Engineer in the crew, but also to put them in contact with each other, all these years after their relatives died together over Germany – a story which I think, still has things to be discovered about it.

Please go to the iTunes store or any other digital store you use and buy the single. Not only does Mark’s efforts deserve recognition, 10% of all sales will go to the Memorial Garden in Mepal and 10% will go to the Poppy Appeal – both very worth causes, especially as we approach Remembrance Sunday.

Many thanks to Belinda, Assistant curator at the Department of Research and Information Services, Royal Air Force Museum, London for passing on these Loss Cards, based on an inquiry I made a couple of weeks ago regarding the flight path for the raid.

In discussion with Anthony, son of Bob Freeman, Flight Engineer with the Gordon crew, he wondered if the reason for the loss of the crew was a falling bomb from another aircraft. Having an idea of where the aircraft crashed, I wondered if light could be shed on its fate regarding the direction of the stream over the target. My personal feeling, prior to getting the Loss Cards and I think also having looked at them is that PB689 was hit by flak prior to reaching the target, the full bomb load resulting in the 98% break up of the aircraft and the loss of all of its crew – but I stand to be corrected…….

My first and obvious thought was to try to put these coordinates into Google Earth, however, having tried to do so, I end up with a series of points that seem way off, relative to the target at Homberg (I did however take 2 goes at getting my map reading badge in the Cubs……) 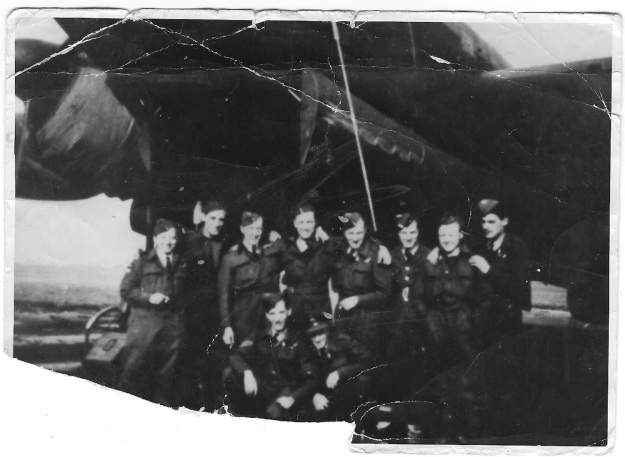 Whilst initially unsure, I am told that Kevin is sure that Louis Sampson is in this picture. Given the changes to crew prior to the Homberg Op – the apparent chance of this picture being taken before the boys were lost is quite incredible….

Many thanks to Kelvin, from the Aircrew Remembrance Society for passing on this albeit battered, but nevertheless precious picture of the Gordon crew, with some of their ground crew. I simply think than in cases of photographs like this, the state and quality doesn’t matter, its what it contains, the memories and the people that’s what important.