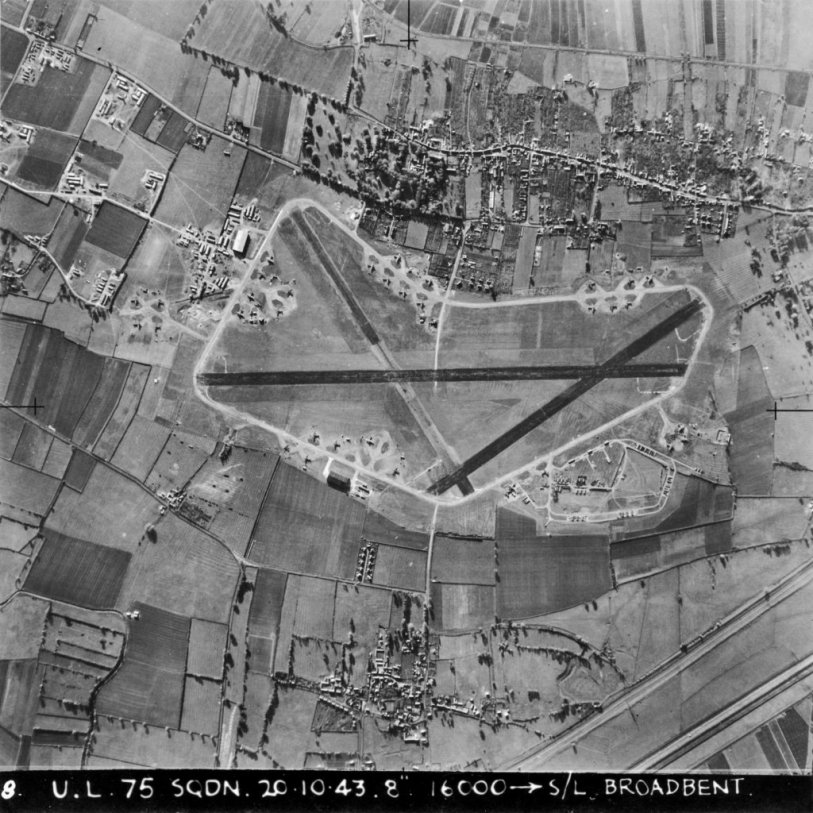 Thanks to Chris for putting together this post on the Mepal airfield and sharing with us all, more pictures from his visit to the New Zealand Bomber Command archive.

One of the frustrations I had early in my search for information about my uncle’s time at Mepal, was the lack of photos of the place during the War years. Most of the photos I came across were aircraft and crews in front of aircraft, with the occasional glimpse of Nissen huts, a few trees, fences, and flat, featureless farmland in the background.

The  three photos from the NZBCA archives give a good idea of the layout of the Base, and how it sat amongst the surrounding countryside.

RAF Mepal  was located near Ely, just north of Cambridge, between the villages of Mepal, Sutton and Witcham. You can still see the outline of the runways and taxiways on Google Earth.

TRANSFER OF SQUADRON
The Squadron was moved to R.A.F. Station, Mepal (Satellite to Waterbeach). The advanced party proceeded on the 27th. June 1943, the Main Party on the 28th. June, and the Rear Party on the 29th. June 1943. This was successfully carried out with the assistance of Motor transport provided by No. 2 M.T. Coy. Cambridge.

This photo at the top of the post is oriented with North at the bottom, South at the top. Mepal village is at the bottom of photo, Sutton at the top and Witcham is out of picture, left. The twin Bedford River canals are visible at bottom right.

At least 34 Stirlings can be seen parked around the various dispersals. Aircraft were kept in the open, dispersed around the airfield, for safety reasons, and to present less of a target. A perimeter road around the outside of the three runways connected the aircraft dispersal ‘pans’ (circular concrete pads about 130 feet in diameter, accessed off the perimeter road by 50 ft-wide taxiways) – crew were delivered out to their aircraft by Bedford bus or truck.

The main runways were about 1 mile long.

Buildings were mostly “tin can” Nissen huts; two messes catered for 1,884 males and 346 females. there was a single B1 and  T2 hanger for maintenance. The photograph was taken from an aircraft piloted by S/L ‘Dickie’ Broadbent, Commanding Officer, ‘C’ Flight, in 1943

From the RAF website ‘Bomber Command Mepal’
Mepal airfield was built to Class A specification as one of the two satellite stations for the Waterbeach cluster. The site on a 20-foot rise out of the Cambridgeshire fens, was confined by the New and Old Bedford Rivers to the west; the villages of Sutton to the south, Mepal to the north and Witcham due east. As the A142 between Mepal and Sutton ran across the middle of the site it was closed off and diverted to run on the road through Withham. Construction began in July 1942 on a £810,000 contract. The concrete runways were: main 08-26 at 2,000 yards, and OS-23 and 14-32 both at 1,400 yards. Thirty-six hardstandings were provided, all being the loop type. Hangars were a T2 and a B1 positioned on the technical site between runway heads 26 and 32, the Bl being to the north, with another T2 on the north side of the airfield between runway heads 23 and 26. The bomb store lay to the north-west, between 08 and 14. The 11 dispersed sites were all to the east of the airfield around Witcham and consisted of two mess, one communal and eight domestic catering for 1,884 males and 346 females.

Officially opened in June 1943, its first occupants were the Stirlings of No. 75 Squadron, removed from the turf of Newmarket Heath, which conducted its first operation from Mepal on the night of July 3. Named the New Zealand Squadron and manned largely by citizens of that country, No. 75 was to remain in residence for a little over two years, seeing out the war from Mepal. No other squadron was based there during this period as No. 75 maintained three flights, their complements often totalling more than 30 aircraft, particularly after Lancasters replaced the Stirlings in March 1944. The squadron lost 104 bombers in operations from Mepal, 50 being Stirlings and 52 Lancasters.

No. 75 Squadron moved out in July 1945 to make way for the assembly and training of Tiger Force, the RAF bomber contingent scheduled to move to the north-east Pacific for operations against the Japanese homeland. These were Nos. 7 and 44 Squadrons, although the latter was soon replaced by No. 49 Squadron. However, the contraction of the RAF during the first year of peace provided several stations with better accommodation than the `tin can huts’ at Mepal and the Lancasters left in July 1946. Thereafter Mepal remained empty of active units for 12 years.

In 1957, the airfield was one of the sites selected to deploy Thor medium-range missiles and three emplacements were built in the north-east corner of the original airfield. When the missiles became active, the operating unit was No. 113 Squadron. By 1963 the Thors were considered obsolete and were removed, the airfield later surrendering to commercial and agricultural use.

The road between Mepal and Sutton villages had been re-opened in the 1950s and in the 1970s the A142 from Chatteris to Ely was established on a new three mile stretch of highway built right across the airfield, bypassing all three of the local villages. Today little of the airfield remains apart from odd lengths of perimeter track used as farm roads. On the south-eastern corner of the airfield site the largest agricultural machinery sale yard in the country was opened in 1997 where monthly hundreds of farm tractors echo the thunder of long-gone heavy bombers.
http://www.raf.mod.uk/history/bomber-command-3-group-mepal.cfm

The photo below was taken by F/L John Aitken, probably some time in 1944, approaching the airfield from a direction equivalent to the top left of the first photo. Sutton village at left. Comparing the two, a new hangar (?) can be seen at  the right (large dark building). 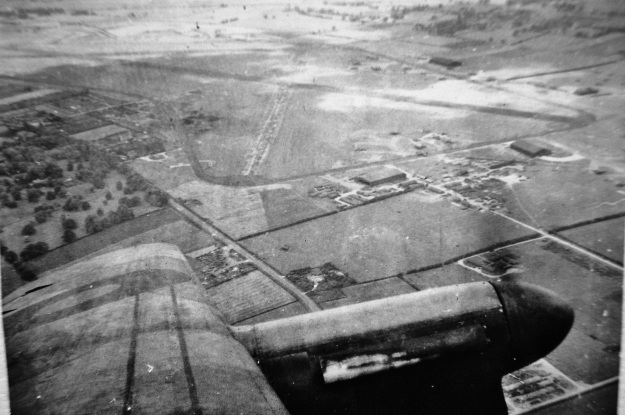 21.7.45 ADMINISTRATION.
The Squadron moved from R.A.F. Station Mepal, No. 3 Group, to R.A.F. Station, Spilsby, No.5. Group. The journey was made by rail and the whole move was carried out very smoothly. We owe a debt of gratitude to both stations for their excellent cooperation in the movement.

Once again, many thanks to Peter Wheeler and the New Zealand Bomber Command Association for the permission to present these pictures.