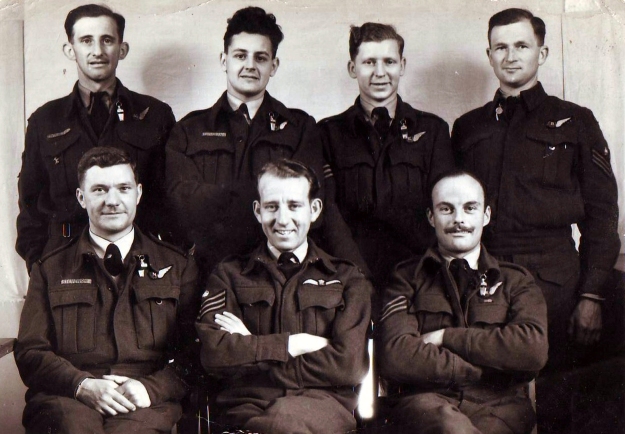 Many thanks to Chris and all those involved in gathering information for this post!

On the 20th/ 21st of July 1944, 75 (NZ) Squadron RAF suffered one of its worst disasters, the loss of seven Lancasters and their crews in the attack on an oil refinery at Homberg. This the story of one of those crews.

Pilot Harold Whittington, from Hamilton, NZ, initially crewed up at No. 11 OTU, Westcott, Buckinghamshire, while training on Vickers Wellingtons. 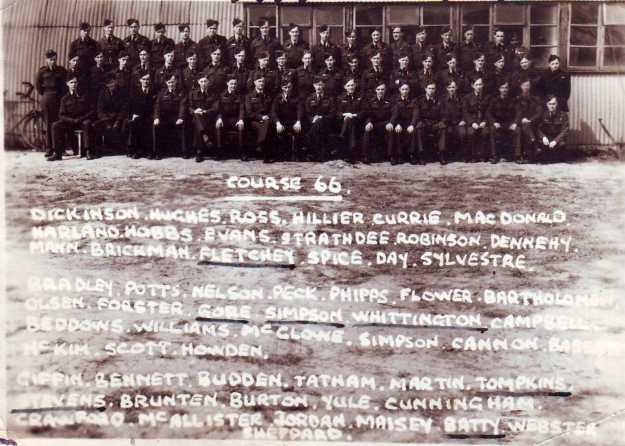 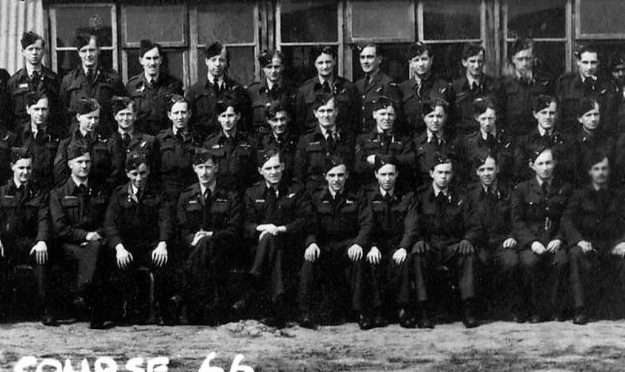 The Whittington crew was posted to No. 75 (NZ) Squadron at Mepal, Cambridgeshire, arriving on the 12th of June 1944, to report for operational duties.

As part of his preparation for operations, Whittington flew a second dickie trip to Le Havre on the 14th of June with the McRae crew in Lancaster ND752, AA-O “Oboe”.

ND752 was at the time starring in a short film being made at Mepal, “Maximum Effort”, featuring Eric Witting’s crew.

Then the crew flew their first op’ together on the night of the 15th/16th of June, an attack on the Marshalling Yards at Valenciennes in France.

The crew flew eight more op’s over France, in support of the Normandy invasion, and attacking V1 rocket launching sites:

Then came the fateful Homberg operation on the night of the 20th/21st of July.

A force of 147 Lancasters, including 26 from 75 (NZ) Squadron, and 11 Mosquito’s of 1, 3 and 8 Groups, were dispatched to attack the synthetic oil plant at Homberg (8 mls NE of Düsseldorf). Although the refinery was severely damaged in this attack, aircraft losses were heavy. German night-fighters wrought havoc on the bombers, shooting down 20 aircraft – 13.6 per cent of the attacking force.

Lancaster Mk.I ME691 AA-R was brought down by an enemy aircraft at 01:33hrs beside a road near Veghel (Noord Brabant), 4 miles South West of Uden. All but the flight engineer perished in the crash and were buried in the local War Cemetery, Uden. Sgt Gore, the flight engineer, survived but was taken as a P.o.W. 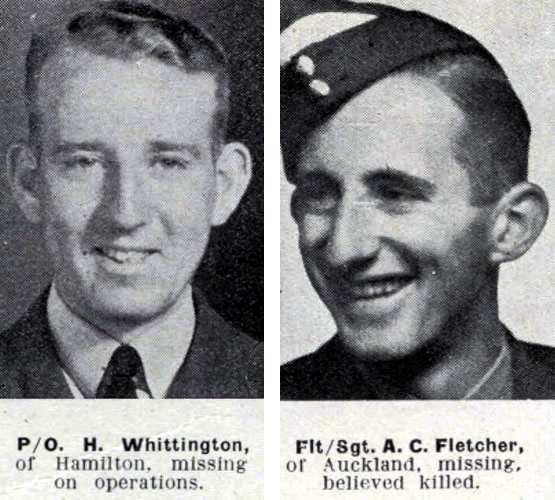 Back in New Zealand, Harold Whittington, Alfred Simpson and Andrew Fletcher were listed as missing.
photos from the Weekly News, via AWMM Online Cenotaph.

It is incredibly sad to note that at least three of  the crew left behind young widows.

Dave Homewood has put together a wonderful record of Andrew Fletcher’s life and full service history on his Wings Over Cambridge website:  http://www.cambridgeairforce.org.nz/Andrew%20Fletcher.htm 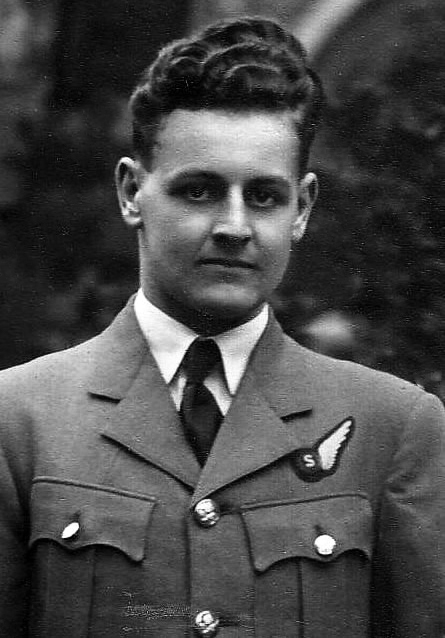 Wireless Operator Philip Tompkins was 21, and had married the girl next door, Joan, only two months earlier.

Later, she re-married, and it is her second husband, Graham Nicholson, that we have to thank for these photos of Philip and his crew. Graham (86 at the time) posted about Lancaster ME691 on the Wings Over New Zealand forum a couple of years back, and he and I briefly corresponded by email. He was very keen to share the photos, to make sure that the crew is remembered.

A further postscript can now be added to the story, as the same WONZ thread recently led to contact with Dutch researcher Adrian van Zantvoort. Adrian has long been interested in crash sites in the area where he lives, the South East of The Netherlands.

In 2005, he spotted an article in a local newspaper, the Udens Weekblad, about the discovery of a wartime photo album. This is Adrian’s translation:

Herman du Maine, a citizen from Haarlem, found a shelter from November 1943 until the liberation in September 1944 in a farm at Maria-Heide (a village east of Veghel).  After his death his daughter, Willie Bloks-du Maine, discovered a pile of letters and documents about the war period, and also a photo album with never published pictures.

It took some to getting used to but the stay of Herman went very well. He started with buying postcards and also he got a photo camera and a few rolls of film to take pictures of certain events in his neighbourhood. The pics he took were printed by Johan van Eerd, a photographer from Veghel. Herman started with taking some pics of his fellow hiding comrades. In the night of 20/21 July 1944, a Lancaster bomber crashed on the edge of Maria-Heide village. The cockpit touched the farmhouse which was belonging to the Family A. Vissers. The remainder of the aircraft fell around the farm in a field. Six crew members where killed and buried at Uden War Cemetery. One crew member managed to bale out, but was arrested later and became a POW. Willie Bloks-du Maine said “as soon as he got the chance my Father Herman made a pic of the damaged farm with in front a part of the aircraft”.

The article was published alongside Herman’s photo of the crash site. Adrian contacted his daughter Willie, and has obtained a copy: 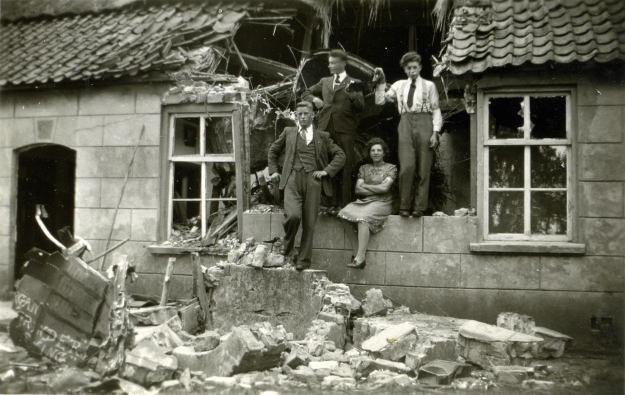 ME691 crash site, with the Vissers family and their damaged farmhouse, 1944. Piece of Lancaster wreckage at left.
Photo from Mr H.F.du Maine, via his Daughter Mrs Willie Bloks-du Maine, and Adrian van Zantvoort.

Adrian is very keen to visit the crash site, although Willie says that the original farmhouse is currently being demolished to make way for a new one. Apparently Mr du Maine only took the one photo, but Mrs Bloks-du Maine has provided a map.

The photo has revealed another piece of fascinating information. The aircraft wreckage lying on the ground at left of the photo is part of the fuselage, from just below the cockpit where the Pilot would be sitting, and there are faint bomb markings and clear writing on it – evidence of nose art and probably a name that was applied to ME691.

The visible lettering is “.. RGAN GRINDER’S SWING”, probably “Organ Grinder’s Swing”. This was a popular song of the 30s and 40s (https://en.wikipedia.org/wiki/Organ_Grinder’s_Swing) and perhaps there is also a humorous reference to the place where the (street entertainer) organ grinder’s monkey sat, ie., the guy who is not really the boss at all.

Referring back to the operational history of the aircraft, Avro Lancaster ME691, AA-R (https://75nzsquadron.wordpress.com/me691/), her first five op’s were flown by W/O Des HORGAN and his crew! So the nose art was probably applied by or for them.

In fact, Des Horgan & crew flew all of their last seven op’s in ME691 before ending their tour (https://75nzsquadron.wordpress.com/horgan-crew-27-8-43-empty/).

There may be more to add to this story, as Adrian continues his research, as I try and track down Andrew Fletcher’s family (he came from Devonport where I live), and as we try and learn about Flight Engineer Don Gore’s POW exploits. Hopefully, someone will see this post and be able to contribute more about the other crew members.

However, in the meantime it is very satisfying to put together the pieces that we do have, in memory of Harold Whittington, Philip Tompkins, Andrew Fletcher and the rest of the crew of Lancaster ME691.

Special thanks to Graham Nicholson, Adrian van Zantvoort, Mrs Willie Bloks-du Maine. Thanks also to Dave Homewood and the fantastic resources and community that he has created and fostered at Wings Over New Zealand and Wings Over Cambridge.

I have been contacted by Gaynor, the great niece of Henry Hiscox, Rear Gunner with Neil Davidson’s crew and one of seven aircraft lost on the nightmare Op to Homberg on the 21st July 1944 – the Squadrons highest loss total during the War.

The following information about the loss of HK569 comes from http://wikimapia.org/14265238/Final-Resting-place-of-Flt-Sgt-Henry-Hiscox-RAFVR-July-1944-Old-Cemetery – the author of the information is listed as ‘Typhoon’, so I credit Typhoon with the piece and the obvious research effort that supports it.

His Avro Lancaster B.I bomber (code name AA-Q, fuselage No. Hotel Kilo 569). of 75 (NZ) Squadron RAF, took off from RAF Mepal, Cambridgeshire, England, on its way to bomb the Fischer Tropsch oil refinery/aviation fuel producer in Homberg, Germany with a full load of bombs on the 21st of July 1944. It was attacked by a German night-fighter over Heibloem, Limburg, The Netherlands on its way to the target.

The pilot, a 21 year old New Zealander, Flt. Sgt. Neil Douglas Davidson RNZAF flew the badly damaged and blazing aircraft on over the River Maas towards Reuver (Beesel council area) but turned and tried to land it in the river, he succeeded but it hit the river bank and exploded. The bomb aimer, Sgt. T.G. Little RAF, had managed to bail out on his parachute but it failed to open fully and he was badly wounded when he fell into the garden of a house in the village of Kessel. He was taken to a hospital, subsequently made a prisoner of war (POW No. 52469) in Muhlhausen POW camp and survived World War II, passing away in 1990.

The tail of the aircraft fell away from the fuselage into a field just before impact on the river. Flt/Sgt Hiscox was in his tail machine-gun turret and fell with it into the corn field. It is thought he died a day or two afterwards, was found two weeks later by a Dutch farmer’s labourer, Sef Willems, who turned out to be a member of the Dutch resistance movement under cover. Henry was buried in the Beesel grave yard. The grave digger had a bunch of flowers with him, the German soldiers threatened to shoot him if he laid them on completion of the burial, He passed the flowers on to local people who in the dark of night threw them over the cemetery wall onto the grave !

No remains of the pilot and the rest of the crew were found and they are presumed missing in action. A memorial plaque to the 6 crew members who died has been put up close to the scene of the crash in the town of Kessel. That took place with many notables attending on 21st July 2011, exactly 67 years to the day and unveiled by the Brother and Sister of the Pilot. They came all the way from New Zealand specially for that. Family members of Sgt Goddard and Sgt Sloman also came to the unveiling from England.

After the war the people of Beesel looked after Henry Hiscox’s grave erecting a wooden head piece, with propeller on it and Henry’s flying helmet hanging on it, until it was given a standard Commonwealth War Graves head stone.

Since the 1960’s Mrs. Tiny Claessen has voluntarily tended the grave on a weekly basis, winning the admiration of many visitors. On Dutch Remembrance day 4th May 2006 Tiny was presented with a plaque of thanks by the Mayor of Beesel, coinciding with the first visit of Henry’s Daughter, Grandson and Great Grandson to his grave (they knew he was buried in The Netherlands but not where until found by retired Sgt Pilot A.A.C. Barrie Davies. That was the first ‘thank you’ she had ever received for over 40 years of work. To date she is still tending Henry’s grave.

Every year the local school ‘last term’ children have a ‘Sgt. Hiscox’ project and led by the Mayor hold a remembrance ceremony on the 4th of May, at the grave side.

To the people of Beesel this grave and a recently erected civilian memorial close by is the focal point on the Dutch Remembrance day of 4th May.”

Gaynor would dearly like to know about the crew and in particular she is hopeful that there may be a photograph of the boys. As always, if you have any information on Henry, or the Davidson crew, please contact me.

Given the calamitous events of the night of the 21st – it seems only fitting that in remembering Henry and the Davidson crew, we should do the same for the other airmen that were either killed or captured that night.