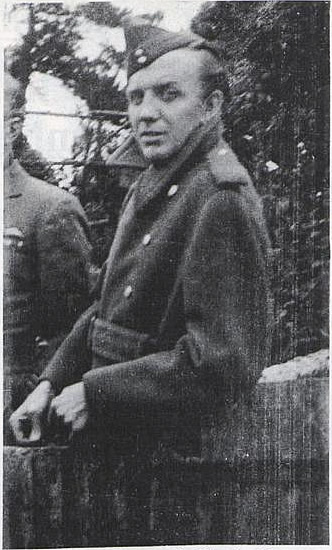 Another post from Chris – and another Knight of the British Empire…….

Born March 7, 1909, Sir Charles Thomas Hewitt Mappin was the 4th Baronet and son of Thomas Wilson Mappin and Violet Maud Duke , a member of one of the families behind the Mappin & Webb business, steel manufacturers, silversmiths and jewellers.

Apparently a member of the House of Lords, and listed as a “landowner”, Charles married Ruby Duff, and had a son Michael in 1931. According to the Daily Express of the day, he was ‘a leader of the Bright Young Things’.

A lover of practical jokes, in 1932 he announced plans for the “Old Berkeley Square Cat Hunt”, to round up all the stray felines of Mayfair whose howling had been disturbing him at night, with the aid of 100 residents and greyhounds. The cats were to be locked in a room and painlessly put down. A large outraged crowd gathered, and the police and RSPCA also fell for the prank.

Neither politics nor family life appear to have suited Charles, as by 1939 he had apparently spent most of his Mappin & Webb inheritance, and was sailing around the islands of Tahiti on a yacht, fishing, drinking, pearl-collecting and womanising. He left a rollicking, bawdy record of his exploits in a diary, published in the Spectator many years later by his half-sister, the equally eccentric Margot Duke.

“And then came the famous Quatorze Juillet, and Tahiti is reputed to do it as well as any place. All shops are shut, the square in front of Government House is turned into a fair with roundabouts, coconut-shies, dance halls, bars and all the whoopsy nonsense you can imagine. This continued for 14 days, open day and night, and not a sober person on the whole island. Each night the districts sent their dance teams to dance before the Governor in native costume, and to sing their local himenes. All very impressive and romantic and a wonderful excuse for one more rumble-bumble, and one more bottle before returning to the country to sleep it off before starting again the following morning. I man- aged to make the 14 days, then chaos. By this time Bryan and I were staying with Rupert, who had taken a house, also in Punaauia, in preparation for the return of wife and infant toreador-aviateur.

Fortunately I had asked an Australian, Roger Barry, to lunch with me the following day at the Blue Lagoon and he arrived at 1 o’clock to find me quite crazy, imagining the most extraordinary things and living a life of my own entire imagination. He stayed with me for three days and three nights without leaving me for one minute. My ravings I won’t try and explain as, except for Ann, they only concerned people on the island. I was cured by intravenous injection of somnafeine, and, although I pray to God it never happens again, it has done two good things: it has shown me I have a very good friend in Roger Barry, and it has frightened me on to the wagon until Christmas.”
(From The Spectator Archive – http://archive.spectator.co.uk/article/23rd-april-1994/23/adventure-on-the-south-seas)

According to the Spectator article, his vessel carried no radio, and the war had been declared for six months before he heard of it. However his final diary entry, as published, is dated 22 September, just 3 weeks after war was declared, and he mentions the Administrator giving them “the latest war bulletin” when they came into port.

He came home, and volunteered for the RAF as a rear-gunner, and is said to have refused a commission and a ground job. His sister described the decision as “suicide . . the norm was three trips, and they used to hose them out.”

Sir Charles graduated as a sergeant gunner, and was posted to 75 (NZ) Squadron RAF – then  based at RAF Feltwell.

Charlie’s first op’ was as Front Gunner with the experienced Ramsey crew.

04/11/1941 – Bombing Attacks Against Targets at Essen
Nine Wellington 1C aircraft from this Unit were detailed to carry out the above attacks. Heavy cloud was experienced throughout the whole trip and although bombs were dropped in target area no results were observed. Accurate Heavy Flak was met over the target area and searchlights were active, but ineffective owing to cloud.  No enemy aircraft were met. Weather was very poor with 10/10th cloud which completely marred the whole operation.

For his second Op, he and Foster joined the Wilson crew. Navigator Ryder, Wireless Operator Reid  and Rear Gunner Hope were probably members of their original OTU crew.

John Wilson had arrived on Squadron on 2nd of September, and this was his first Op as Captain of his own crew

07/11/1941 – Bombing Attacks Against Targets at Berlin and Ostend
Fourteen Wellington Ic aircraft were detailed from this Unit to attack the above targets. Two of these aircraft, X.9951, captained by F/O Methven and X.9976, captained by Sgt. Black, failed to return to base. A mixed bomb load was carried consisting of 1000lbs, 500lbs, 250lbs and containers of incendiaries. Bombs were dropped in target area and some large fires were started, but results were not clearly observed owing to heavy cloud over target area. A considerable amount of heavy flak was met over target area but searchlights, where seen, were ineffective. No enemy aircraft were met throughout the trip. Weather was poor with 10/10th cloud over target area. Navigation was good, Astro and D/R loops being used. Wellington Z.1091, captained by P/O Sandys returned to base owing to engine trouble. Wellington Z.1068, captained by Sgt. Parham returned to base owing to Navigator being sick.

Sadly, the crew’s second op’ together was their last:

08/11/1941 – Bombing Attacks Against Targets at Essen
Eleven Wellington Ic aircraft from this Unit carried out the above attacks. Three of these aircraft, X9268, captained by Sgt. Smith, X9977, captained by Sgt. Nunn, and Z8942, captained by Sgt. Wilson failed to return to base. Bomb load consisted of 1000lbs, 500lbs, 250lbs. and containers of incendiaries. Many large fires were started with resultant explosions and burst were observed across a but-up area. A railway junction to the South of the target was also successfully attacked. Much heavy and light flak was experienced and large cones of searchlights were active in target area. Several enemy aircraft were seen in target area co-operating with searchlights. Weather was moderately clear to target but haze over target. Navigation was very good.

Wellington Z8942, AA-J was shot down by Flak and crashed at 22:15 on the night of 8 November 1941 at Zuidland (Zuid Holland), 20 km SW of Rotterdam. All were killed except for the Rear Gunner, Lawrence Hope, who was captured and became a Prisoner of War. 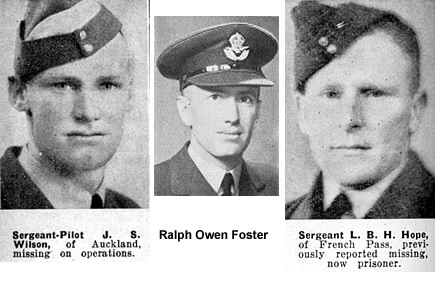 Tragically, Lawrence Hope did not survive the war. Whilst on a forced march from Stalag 357 at Fallingbostel to Lübeck with some 500 Allied prisoners, he was one of 30 POWs who died at Gresse, 14km NE of Lauenburg, when RAF Typhoon fighter-bombers attacked the column, mistaking them for enemy troops. He died on 19 April 1945, less than three weeks before VE Day. Initially buried in the parish churchyard at Gresse, but in July 1947 reinterred at the Berlin 1939-1945 War Cemetery.

On the day Sir Charles Mappin was posted as missing, his Mother told the Daily Express:

“I am proud of Charles, he had guts”.

I am pleased to relay to all of you that I received an email from Chris,
Assistant Curator, Military Heraldry & Technology at the Australian War Memorial this morning informing me that, to the best of his and his teams knowledge all items held in the collection which encompasses uniforms, badges, medals  etc and items of military technology has had it’s information updated to correctly/ accurately  reflect the name of the Squadron.

I am really pleased to have received this information as it represents an ongoing effort by the AWM to update their records after an initial request made by myself slightly over a year ago. My first contact was replied to very quickly, but obviously a task of this kind takes time and coordination and obviously has to fit within other projects and activities that the curatorial staff are involved with.

As I said in my original post about this work, whilst a small detail of correction, it’s a significant one , I am sure , for the families and relatives of the 32 Australian airmen that died with 75(NZ) Squadron RAF.

Many thanks to all of the Australian War Memorial staff who have helped make this happen.

Many thanks to Maaike for supplying these photographs of the gravestones of the Wilson crew.

At approximately 17.00hrs on the 8th of November 1941, 13 Wellington Bombers of 75(NZ) Squadron RAF took off from Feltwell to join another 41 bombers from other Squadrons to bomb Essen. At approximately 22.15 hrs Wellington Ic, 78942, Captained by John Wilson, crashed at Zuidland, 13 miles South West of Rotterdam. All of the crew were killed apart from the Rear Gunner, Sgt Lawrence Hope.

Sgt Hope was taken Prisoner of War and imprisoned initially in Dulag Luft, Stalags VIIIB, Luft III, Luft VI and finally Stalag Luft 357. After remaining captive for the rest of the war, Lawrence Hope was tragically killed, with 30 other Allied Prisoners of War, when, while undertaking a forced march away from the prison camp to Lubeck, they were mistaken for German soldiers and straffed by RAF Typhoons.

Sgt Lawrence Beresford Hamilton Hope, RNZAF NZ40940 – Rear Gunner
Whilst initially buried at Gresse, with the rest of the dead from the attack, he was later re-interred at the Berlin 1939-1945 War Cemetery.

After initially contacting the AWM with my request that the records be corrected, the staff replied to me and very quickly corrected the information. I am sure that we all send our thanks to the individuals who were involved in this activity. Whilst perhaps to some, a small matter of detail, to many of us, including , I am sure the families of these 32 brave boys, it is a very important one nevertheless.