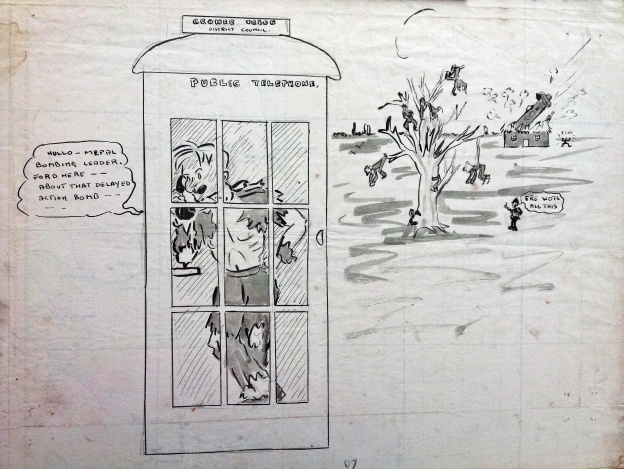 Original carton by Bill Osborne based on a safe drop of a ‘hung’ bomb, tasked to Terry Ford
© Julia Burke/ Meryl Poole

It never ceases to amaze me the strange coincidences that occur as information comes into the blog.  Some months ago I was contacted by David, his Father, Henry Smulovitch,  was Flight Engineer with Roy Osborne’s crew between September and December 1944.

Tantalisingly, at the time, I found a reference to Roy, or ‘Ossy’, or ‘Bill’ Osborne in Harry Yate’s book “Luck and a Lancaster”:

“Of the three second dickeys whom we initiated, only the first, Bill Osborne survived a tour. He became quite a character on the station. He had a great knack of capturing anyone’s essential features with a few affectionate strokes of the pen. At most times, an Osborne caricature was to be found on the mess notice board.”

I wondered at the time of the post on the Osborne crew, whether there might possibly be an example of Bill’s penmanship somewhere out there – and low and behold, after contact with Terry Ford’s 2 daughters, my question/ hope has, I am incredibly pleased to say, seems to have been answered.

The cartoon at the top of this post was penned by ‘Bill’ Osborne after Terry Ford had been charged with the disposal of a hung up bomb – the following is a paragraph written by Terry to Bill Moore:

“On the 10th November 1944 I was asked to fly a Lancaster which for some reason still had a long delay bomb on its bomb rack, and to dispose of this bomb in the North Sea. There was no
danger in this and in fact I took some young Air Training Cadets with me for flying experience. However the wags of “B” flight pulled my leg about it, and wished the crew goodbye, and a fellow pilot, F/Sgt Osborne, who incidentally also came  from Bristol, did the enclosed cartoon. He was an amateur cartoonist who drew under the name of “OZ”

Putting out this post, I’ll cross my fingers and hope again – are there any more of Bill Osborne’s cartoons out there……..?!?!?……..