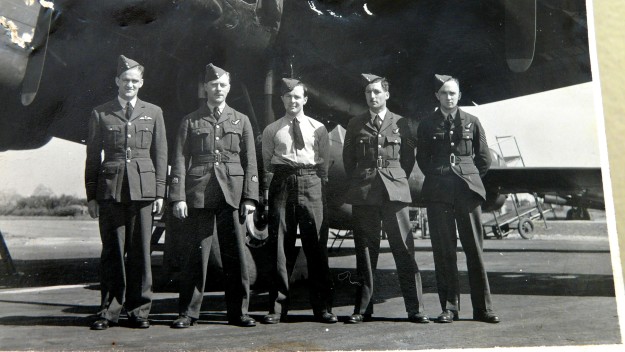 I would like to thank particularly David Duxbury, but also everybody who has contributed information on the individuals listed below.

The Zinzan crew arrived at Mepal on 3rd December 1944 from 1665 Conversion Unit. On the 11th of the month Vernon undertook a ‘second dickie’ flight with the Wakelin crew to Osterfeld. The following night the crew undertook their first operational raid to Witten – it was not without event. Over the target, it would appear they collided with the aircraft of F/Lt Hannan (also of 75(NZ). It is believed that the damage sustained in this collision forced Vernon to land heavily on their return to base. The resulting impact caused the Air Bomber, Ken Mesure to break his leg. This incident seems to have started a chain of replacement aircrew that resulted in Bob joining the crew on his return to the squadron, after the crew had completed 9 ops up to the end of January 1945.

Based on my research of other crews, this crew seems to have gone through an amazing number of initially Air Bombers and latterly Rear Gunners – I currently have no explanation for this.
The Zinzan crew were as follows; – (I have ordered the crew based on their crew list order and number of ops flown, rather than chronologically)

Vernon flew 30 ops with 75(NZ) Squadron, including a ‘second dickie’ flight to Osterfeld on the 11th December 1944 with the crew of F/Lt. Wylie Wakelin.

Vernon passed away on the 21st  March 2007 at  Middlemore Hospital,  Auckland, New Zealand. His funeral service was held at Mauku.

P/O Robert Douglas ‘Jock’ Sommerville RAFVR 161049. Air Bomber (A/B) – 21 ops
Jock returned to Mepal a little over a year since he had left it. I don’t suppose I will ever know whether his return to the squadron was utter chance or a specific request on his part. I know Allan desired and eventually got into PFF, I don’t know about Jack – I should ask, this might shed some light on Dad’s route back to 75(NZ)

F/O Kenneth Cyril Mesure RAFVR 1802416/ 164824. Air Bomber (A/B) – 1 op
Part of the original crew that arrived from 1668 CU, Ken was unfortunate enough to badly break his leg during a very heavy landing after the crew’s first raid to Witten – he never flew with the crew again. Strangely, Ken is listed on the 26th of June as returning to the Squadron from No. 33 Base (N.E.S) – I am guessing and would be grateful of clarification, but I think N.E.S must stand for non/ not effective strength.
His single raid with the Zinzan crew was: Witten 12/12/44.

Sgt. J Tutty RAFVR Rear Gunner (R/GNR) – 1 op
21 Dec 1944 to x Jun 1945. c/w R B Crawford as R/Gnr.
Interestingly it would appear that Sgt. Tutty was part of the same crew as Sgt. Bullock and one of only 2 of the crew that escaped from the return crash on the 3rd of February from Dortmund without the need for hospitalisation. It would appear as a result of this that he was simply available to crew up in the absence of his own. Sgt. Tutty flew 1 Op with the Zinzan crew  on 8/3/45 Datteln

F/O Charles Frederick Green DFC RAFVR 178730 Mid Under Gunner Mid/U/Gnr)
16 Jan to x May 1945 as Mid-Under Gunner.
Citation DFC (25 Sep 1945):
“This air gunner has completed numerous operations against the enemy, in the course of which he has invariably displayed the utmost fortitude, courage and devotion to duty”.

F/Sgt James Henry Murphy, DFM, RAFVR 1393306  (AG)
7 Aug 1943 to ? Jun 1944 & 30 Dec 1944 to ? May 1945. c/w F P Lundon as MU/Gnr then with T G Buckley. The Squadron commander’s recommendation was :
“Flight Sergeant Murphy has carried out 31 operational sorties, targets including many of the most heavily defended industrial areas of Germany. He is an excellent Air Gunner and is always willing to engage the enemy. His coolness and efficiency under stress has played no small part in his crew’s brilliant record. His constant cheerfulness and untiring devotion to duty are deserving of the highest praise and I therefore have no hesitation in recommending that he be awarded the Distinguished Flying Medal.”

F/Lt. Kenneth William John Tugwell, DFC, DFM, RAFVR 162524. (AG)
28 Aug 1944 to ? 1945 Posted in as Gunnery Leader – no crew affiliation. Citation DFC (7 Dec 1945):
“Flying Officer Tugwell has completed many operational sorties against heavily defended targets. In February 1945, he was detailed for an attack against Dortmund. Shortly after leaving the target his aircraft was illuminated by searchlights and then engaged by two enemy fighters. After evading the searchlights the aircraft was again attacked by an enemy fighter. Flying Officer Tugwell opened fire and forced the enemy fighter to break off the engagement. At all times this officer has displayed a fine fighting spirit and great devotion to duty.”