The Terry Ford archive continues to give up some fascinating things, this post collecting together some documentation which is best placed under the heading “Emergency Procedures”….

Without doubt, (in my opinion) the most remarkable of these documents is the one above. Wonderfully titled “General Instructions For The Starting And Running Of The Type Of Small Boat Engine Normally Found In Norwegian Waters”, the document is printed on what appears to be rice paper or similar. Having viewed and handled the document, it is incredibly fragile and we must assume was designed to be consumed either to deny its capture by enemy intelligence, or simply as a filling dessert……

If an airman was in any doubt as to why he should be aware of the necessary starting instructions of a Norwegian boat engine, the first few paragraphs of the document explains…..

“Most fishing and small transport vessels employed on the Norwegian coast are fitted with Semi-Diesel engines. There are a number of different makes and consequently many variations in detail, but the principles and main features do not differ very much. There are in addition a few Semi-Diesel engines of special design which will not be considered in this paper.

The sketch shows one of the most common types found in Norway. The purpose of this paper is to try to give elementary instructions in the starting and running of this type of motor for the benefit of those who might have to deal with them in an emergency and do not possess any previous knowledge of small boat engines, but who are familiar to some extent with engines as such.

It should be noted that the horsepower developed by this type of motor is normally considerably in excess of the stated horse power.”

And later on, some wonderful advice regarding checking whether the engine is yet hot enough to run…….

“To find out if the motor is warm enough for starting put an ordinary safety match against the head without striking it. If it lights immediately the motor is hot enough. Make it a rule never to put out the blow lamp before you are certain that the engine is running steadily. It should always be kept handy in case of engine stoppage”.

I must say, whilst familiar with the escape maps printed on silk, I have never seen or heard of this edible kind and I would be fascinated to see others, if anyone knows of them. 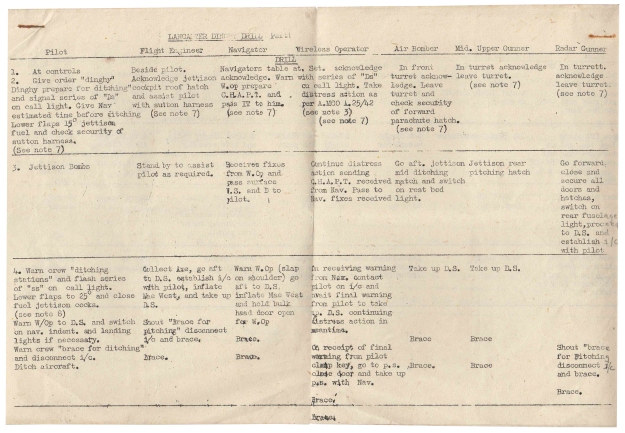 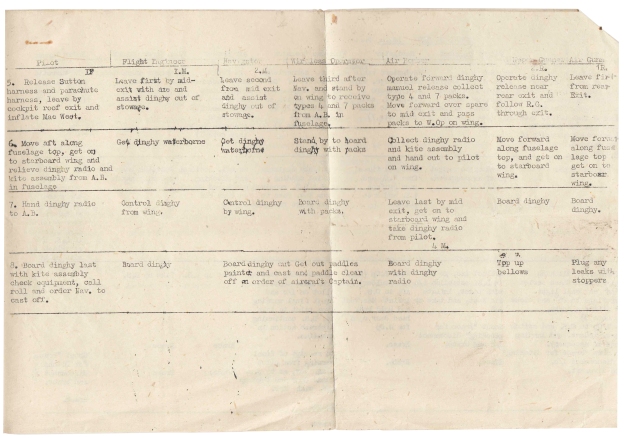 The second 2 sheets outline the procedure for deployment of a dinghy when crash landing in water. What strikes you reading this is the incredibly ordered and specific tasks and activities that were required to be remembered at an instance of chaos when a large metal tube, designed to fly in the air is suddenly, possibly with some force, sitting, or more likely sinking in cold dark water – and probably in the pitch or near black-out. I am sure its testament to constant drilling and practice and I certainly recall a number of photographs showing airmen in their swimming trunks stood by the side of a swimming pool, familiarising themselves with such skills. Perhaps the compare and contrast can be imagined by the following extract from “Up and Under” by Gwyn Martin, who has featured a few time on the blog in the last few weeks, regarding his and his crews experience of a crash and escape from a Wellington bomber, on water at night……

“I went forward to the bomb sight and fused the mines, coming back to stand beside Shag for the run into the Karmsund. He was losing height in a shallow diving turn, when a bright signal light shone ominously on the ground. Shag and I recognised it for what it was, the front gunner didn’t. I shouted at Shag,

“Turn Shag, for Christ’s sake turn.”
“What the hell do you think I’m doing?”

I looked out to see we were now almost in a roll, with flak pumping up urgently towards us, not floating in the cotton wool ball manner to which we were accustomed at greater heights.

The first shell went through the starboard engine, the next hit amidships. We were on fire from nose to tail. The intercom went with the first burst, which also killed Don Taylor and Frankie and Johnnie, our two carrier pigeons. The ammunition storage ignited, sending exploding bullets flying around like a Chinese New Year celebration. I went forward to defuse the mines, but it was too late. There were no electrics. I banged on the doors of the front turret, for Dalziel to come out. I passed Shag, still working hard to keep us in the air, but he was running out of time, luck and airspace, everything except courage. Jim reported in his best Cockney, “Taff, we’ve f****** had it!”

Nothing was more obvious. He and I went back to see if there was a chance of improving the situation aft of the office. With Jim leading, we went through the rear door, but as he came to the main spar, the reserve oil tank on the starboard side blew up in his face and over his hands. At the same moment, the flares and pyrotechnics by the flare chute caught fire. The fabric was well alight already, and I could see the ground fifty feet below. The mines were still in the bomb bay, despite our efforts to dislodge them. Jim and I took up crash positions on the floor of the office. Through our legs, we saw the roof of a house go by. We went up a bit, then down a bit, then we hit water, when Jim, in great pain, leapt from the floor and went out through the roof. Shag shot out of his oversized, borrowed, flying boots, through the Perspex windscreen. My head came abruptly into contact with the door. My next conscious moment found me sitting on the floor of the office, with the W/T receiver and sundry other wreckage in my lap. I was unable to move, my predicament made worse by being submerged, I was drowning. Above me, was a greeny blue hole ominously getting darker.

Suddenly, the floor moved to the right, freeing my left leg. I made a movement and was out like a cork from a bottle, surging up through the green blue hole into the night. There I hovered for a while, airborne above the lake. I heard Shag shouting, “Gwyn, where are you?”

I felt I could have answered, “I’m up here, you silly old bugger.” I didn’t, because he was pulling me into the dinghy, along with Jim and Dalziel.

In the dinghy, released automatically in the crash, we took stock of our position. Shag had facial injuries and no boots. Jim had burns to his hands and face, and was also without boots. Dalziel was badly wounded, clearly dying. I was unsure what was happening to me from my waist down, but I had one boot. We looked in the First Aid pocket for morphine for Dalziel, only to discover that there was nothing in the pocket. Some thieving bastard or incompetent slob had either pinched and flogged it or had not packed it. We tried to assure Dalziel that, once ashore, we would get help quickly. We tried paddling towards where we thought the shore ought to be. After minutes of furious paddling, we hadn’t moved. We were stuck on a piece of wing, impinged dead centre of the dinghy bottom and we were driving ourselves around in non productive circles. Shag removed the piece of wing, we paddled again, and still we made no progress. This time, we found we were still tied to the nacelle mooring, until Shag cut this umbilical cord. We paddled again, still getting nowhere. We could now make out the shape of the land, but we were unsure of how far we were from it.

Shag called for volunteers to swim ashore. Dalziel was out of it, Jim, a pre-war Southern Counties swimming champion, couldn’t manage either, but I, as a better than average swimmer, couldn’t feel my legs. So it was Shag, a non swimmer, who volunteered for the task. He asked that Mary and his family should be informed that he had done his best, in the event that anything happened to him.

Over the side he went, with one arm on the dinghy, pulling it as he thrashed the water with his other arm and legs, hopefully pointing towards the shore. He performed this antic for sometime before collapsing. He sank immediately, assuming a kneeling position in nine inches of water. We were hysterical. Nothing could have been funnier.”

The two pages above are titled “Emergency Stations”. I must admit reading through the first page I am a little perplexed that even before anything has happened, the instructions require both Mid Upper and Rear Gunner to brace themselves their arms round each others neck!. The footnotes also do not, I feel, aim to necessary bring natural calm to any impending situation –

Now, it might be me, not having had an air force training, but this makes no sense to me and reading that section back   what does “A” even stand for??

The last of the formal documents (above) is the parachute drill. Again, it amazes me that given the potential of the scenario that would require this particular protocol to be but into operation would very possibly negate that very same protocol – I suspect, training and a hell of a lot of gut instinct and luck would be the deciding factor and with it, survival or death.

John McFarland’s memories of just such an event shows the need for speed perhaps over process:

“We flew from a remote base near Ely in East Anglia and were engaged mainly in sea and French railway yard mining operations as well as drops to the French Resistance. It was during one of these we were shot down. The Germans had the capability to fire vertically upwards. We were over Denmark and it was around midnight when my navigator’s table shattered and I knew we’d been hit from below. Everything happened so fast. We had to bail out and use our parachutes. The parachute wrappers used to put little notes in with the silk saying things like ‘all the best’!  Only three of us survived that night – the rear gunner’s parachute failed to open. That could have been any one of us for you just grabbed a parachute on your way out to board the aircraft…” 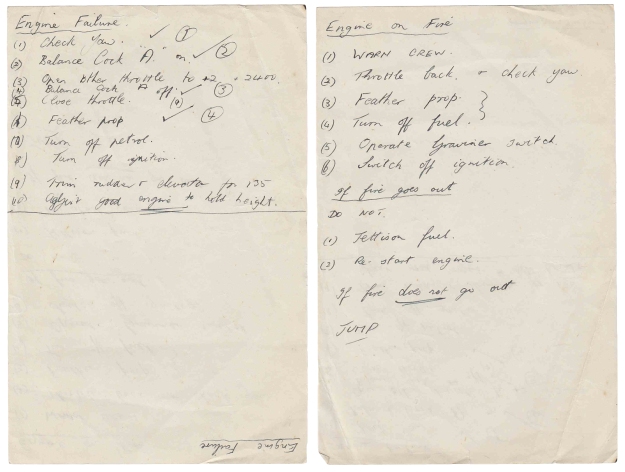 And finally, written in Terry Ford’s own hand, notes on both sides of a piece of paper, one assumes as an ‘aide memoire‘ in case of engine failure or worst case scenario an engine fire. As with all things aeronautical – the solution if the fire does not go out is simple……….