Many thanks to Ian as always for his diligent work with the Squadron aircraft database, of which, a new update has just been uploaded!

Many thanks to Pauline for contacting me regarding her Father, Arthur George ‘Mike’ Smith, Mid Upper Gunner with Bruce Crawford’s crew. As is often the case when a relative contacts me about a member of aircrew who served with the RAF, its an opportunity to add a christian and usually a middle name to the usual initials that exist within the RAF records for the Squadron. In addition to this small but nevertheless important extra piece of information that Pauline has supplied, she has also provided an additional and I believe, a significant new piece of information relating to the Lancasters that flew with the Squadron.

It has always been a considerable frustration, relative to other blogs and websites on other bomber squadrons, that the record of names and nose art for 75(NZ) Squadron aircraft seems to be so scant. Well, it would appear that we have a new one to add to our list – Lancaster Mk.III ND801 JN-X ‘Get Sum Inn’ – the nose art seems to be a flag, the vertical pole clearly visible, but on closer inspection there also seems to be a horizontal bar with ties to the top of the flag. In the bottom left hand corner, its difficult to see if there is a small additional detail or perhaps just damage to the nose art owing to the crash. Additionally, its interesting to note 2 other things, firstly ND801 had racked up 85 Ops (perhaps this was number 86) and also that the bomb tallies clearly are made up of darker and lighter bomb silhouettes – I will stick my neck out at this point and hazard a guess that these possibly distinguish daylight and night Ops…..

The Crawford crew arrived at Mepal on the 21st of December 1944, from No.31 Base. 6 days later Roderick Crawford, the skipper, flew a familiarisation Op with Wylie Wakelin’s crew.

The following day, the Crawford crew undertook their first Op.

11.1.45. War Ops – Attack Against Krefeld
Lancaster Mk.I NG447 AA-T
Sgt. Scott is replaced by an airman, whose name is indecipherable from the Form541 records

15.1.45. War Ops – Attack Against Langendreer
Lancaster Mk.I NG447 AA-T
F/S C. Pratt Replaces flies with the crew as Wireless Operator – perhaps this is the same individual who flew the 11th of January Op to Krefeld with the crew.

From ORB Form 541
‘No report. Aircraft crashed on landing. Pilot, Nav, W/Operator, Engineer and A/Bomber injured and in hospital. Prt. Outr. Failed prior to reaching target and overshot on landing. Camera completely wrecked.’ 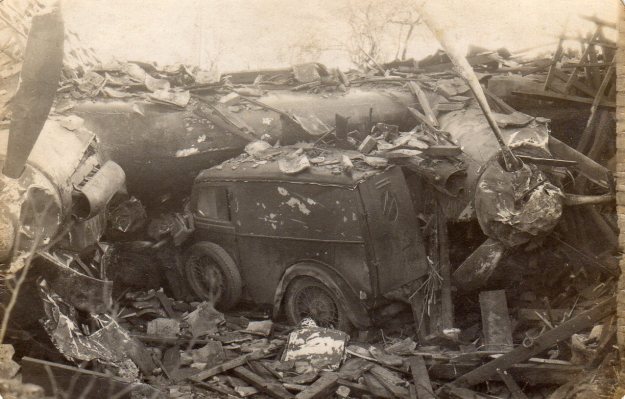 The inevitable destruction caused by a Lancaster when crash landing. Pauline, Arthur’s daughter comments ‘Apparently it ran into the garden of the houses at the end of the runway and killed the chickens in the hen house’. © Pauline Whittall

Additionally:
‘F/O Crawford & crew lost power in their port-outer engine just prior to reaching the target but completed their attack before returning home on three engines. However, on landing back at base at 21.47hrs, the aircraft undershot the approach and crashed heavily on the airfield. The Pilot, Nav, W/op, Engineer and Air Bomber all received injuries and were hospitalised‘.

It is difficult from the above description to understand the exact injuries listed to all of the crew except the gunners. One must assume all were relatively serious. Going through the Form 541 for the rest of 1945, there appears to have been the odd fill in for Sgt. Tutty and  Arthur – however, particularly in Arthur’s case, with a name as common as Smith, in places his apparent presence on a crew list might be a typo. The Ops that might have included the 2 Crawford crew gunners are as follows and includes a commentary where appropriate. Their absence from regular Ops or even their arrival in new crews is perhaps not unusual, given by this point in the War, the Squadron was essentially ‘double crewed’ in each flight – as such, even if an airman wanted an Op it might have been difficult to find a space to fill………

11.5.45. War Ops – Repatriation of Prisoners of War at Juvincourt
Lancaster MK.X RF190 AA-F
Bob Milsom crew
A. Smith Rear Gunner*
*I suspect these 2 possible Ops are actually typos in the records, especially as the regular Rear Gunner for the Milsom crew was John ‘Ted’ Smith – and that on a subsequent Op Ted is listed as ‘D Smith’.

Perhaps the fitting end to Arthur’s and the Crawford crews story is that it does seem that they finally got to fly again as a crew, albeit without the original Navigator Sgt. Boulton, who we must therefore assume had injuries perhaps too severe to allow him to fly again.

Form 541 ends after this month, so it is impossible to know if Sgt. Boulton did finally get back to the crew, or if in fact, the Crawford crew ever flew again with 75(NZ) Squadron RAF.

Given the content of these images, and the discovery of, I believe, a new name and noseart, I would politely request anybody wishing to re-post or re-present these images on the web, please read the copyright section of this blog before doing so.