Close-up of the damage caused to Vickers Wellington Mark IC, L7818 ‘AA-V’, of No. 75 (New Zealand) Squadron RAF, at Feltwell, Norfolk, after returning from an attack on Munster, Germany, on the night of 7/8 July 1941. While over the Zuider Zee, cannon shells from an attacking Messerschmitt Me 110 struck the starboard wing (A), causing a fire from a fractured fuel line which threatened to to spread to the whole wing. Efforts by the crew to douse the flames failed, and Sergeant James Allen Ward, the second pilot, volunteered to tackle the fire by climbing out onto the wing via the astro-hatch (B). With a dinghy-rope tied around his waist, he made hand and foot-holds in the fuselage and wings (1, 2 and 3) and moved out across the wing from where he was eventually able to extinguish the burning wing-fabric. His courageous actions earned him the Victoria Cross. He was shot down and killed while bombing Hamburg on the night of 15/16 September 1941, in another Wellington of the Squadron.
CH 3223
Part of AIR MINISTRY SECOND WORLD WAR OFFICIAL COLLECTION
Royal Air Force official photographer

The picture above is a well known image of Wellington Mk.Ic L.7818 AA-R (not AA-V as the attached caption states), the Wellington that Sgt. James Allen Ward VC, famously crawled out of to extinguish a fire on the wing.

I am very excited to present a number of additional images of this aircraft that were taken on its return. The images were passed to me by an interested party. Whilst there is nothing written on the back of these images, the inclusion of a duplicative images of the photo above with the set, and the additional images showing the same or extra damage to the Wellington suggest very strongly that these are images of L.7818 after its return from Munster on the 7th of July 1941.

The first images is as I said, is an almost exact replica of the first photograph from the Imperial War Museum. Interestingly, the various points of damage are annotated by hand and do not numerically relate to the order of damage on the IWM image.

The second and first of the ‘new’ images shows the Wellington from a front 3/4 low view, showing the significant damage to the starboard side of the nose of the aircraft – the missing canvas showing the aircraft’s famous geodesic frame construction. I am in no doubt that this is a second image of the same aircraft in the first photograph – specific details on the front of the aircraft, upon closer examination clearly are the same when viewed from this new angle. For the first time, it is also possible to see the far more visible damage to the underside of the starboard wing.  Also, just below the circled damage of the underside of the wing, is a smaller circled detail annotated ‘note bullet hole’. 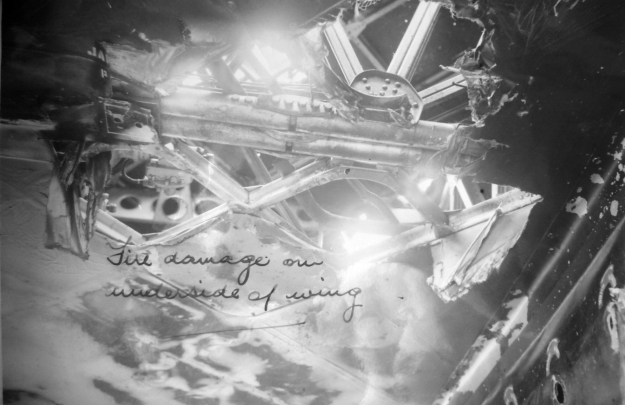 The final photograph shows a much closer view of the underside of the Wellington’s starboard wing. There appears to be blackening or scorching to the bottom left of the photograph, on the edge of the hole burnt through the canvas of the wing, revealing again, the unique geodesic frame.

If anybody has seen these photographs before, or perhaps knows or others – I am sure we would all be fascinated to learn more of the aftermath of this famous event.

Read more about the events of that night here.
Watch a short interview with Sgt James Allen Ward V.C. here.